Kalyanam Kamaneeyam Review: Amid biggies in this Sankranthi race, Santhosh Shoban come up with a new age love story called ‘Kalyanam Kamaneeyam’. The film’s trailer has created some buzz about the film and a lot of youngsters have related to the point that the makers have shown in the trailer. However, without any delay, let’s get into the in-depth review and find out whether the film is worth watching or not. 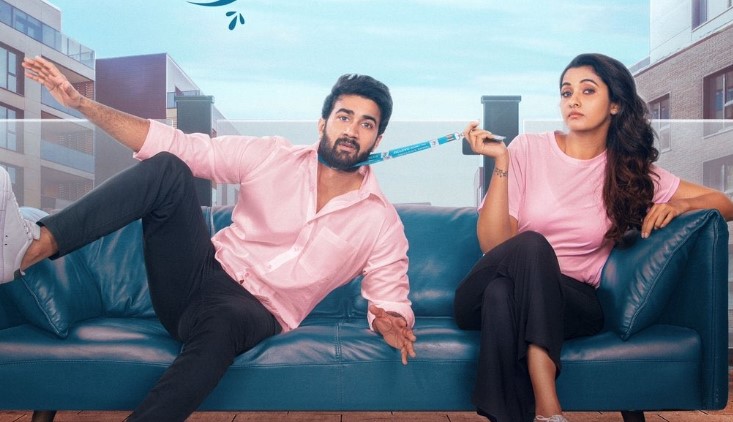 Shiva(Santhosh Shoban) who is jobless enjoys his bachelor life with his parent’s money and one fine day he fell in love with Shruti(Priya Bhavani Shankar) who works in a software company. They get married and still, Shiva enjoys his life the way he was before, Shruti supports him financially and everything seems smooth but one fine day twist arises in the tale when  Shruti demands Shiva to do a job. Finally, how did Shiva deals with the situation who has zero talent for getting a job? What are the problems that occurred in their marriage life? will they hold their relationship that needs to seen in the film?

Santhosh Shoban, Priya Bhavani Shankar, Kedar Shankar, Devi Prasad, Saptagiri and Saddam, and others, and the film is directed by Anil Kumar Aalla, Cinematography done by Karthik Gattamneni, Shravan Bharadwaj is the music composer and the film is Produced by UV Concepts.

The film starts off on a good note and without wasting much time it then dives into the character establishment and plot too. The best part of the film is the story is very contemporary and relatable, the first half has its moments that keep us invested in the story. Despite the snail-paced narration in the beginning, once they get married then the right amount of drama, and comedy makes the first half engaging and the interval block makes us curious to watch.

In the second half where we can see the emotional angle, keeping the comedy like the first half, the second half story is mainly driven by emotions. A husband is jobless even after marriage and the wife wants him to do a job, and how deals with it and how both try to hold their relationship no matter how worst it is, all these points are very relatable and hold your attention throughout the film. It gets predictable at times here and there throughout the film but the narration and good humor keep the film on track.

Santhosh Shoban as Shiva has done a brilliant job, he owns the character and tried to make it authentic as much as possible and he succeeded in portraying the character. Priya Bhavani Shankar made her debut with this film and as Sruthi she does a decent job but in emotional scenes, she completely failed. Kedar Shankar, Devi Prasad, Saddam, and Sapthagiri did the best.

Anil Kumar Aalla did a fine job by presenting the new age love story and contemporary point with good humor. He neatly addressed some social taboos about marriage and being jobless after marriage that are quite relatable these days. However, he succeeded in engaging the audience.

Technically, Kalyanam Kamaneeyam looks good, Karthik Gattamneni’s cinematography made the film looks rich as his framing, lighting, and mood pulled us into the story and made us part of it, and the rest of the technical team did the best.