Jayam Ravi Telugu Dubbed Movies List: Ravi Mohan (born 10 September 1980), better known by his stage name Jayam Ravi, is a South Indian actor who works mainly in Tamil movies. The younger son of veteran film maker Editor Mohan, Ravi made his debut as a main lead in the Tamil remake film Jayam (2003), directed by his elder brother Mohan Raja while produced by his father. The Box Office success of  “JAYAM” changed the sir name to Jayam which means Win in English. 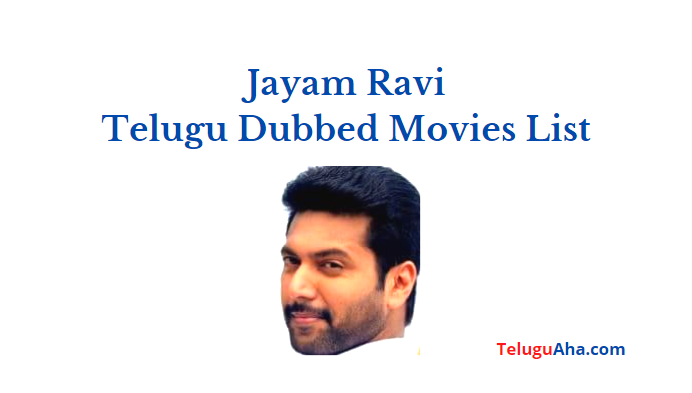 With the success of Jayam he acted in many Tamil remakes of Telugu films and he continued to collaborate with his brother for other films including M. Kumaran Son Of Mahalakshmi (2004), Unakkum Enakkum (2006), Santhosh Subramaniam (2008), Thillalangadi (2010) and most recently, Thani Oruvan (2015).

Ravi is the son of Editor Mohan and Varalakshmi Mohan. Born in Thirumangalam, Madurai. He has two siblings. Elder brother Mohan Raja is the popular film director in Tamil and Telugu. Ravi played the lead role in most of his films. His sister Roja is a dentist. Ravi completed his schooling at Jawahar Vidyalaya in Ashok Nagar, Chennai. Due to of his interest in dance, he learned dance from Bharatanatyam dancer Nalini Balakrishnan, also made his dance debut at the age of 12. After completing his degree in Visual Communication from Loyola College, Chennai, he decided to enter the film industry. Kishore trained in acting at Namit Kapoor’s company in Mumbai. Before debuting as an actor, Ravi had been an assistant director to Suresh Krishna for Aalavandhan (2001) starring Kamal Haasan.