Here are the latest updates of Jagame Tantram OTT Release date, Digital Rights, Online Streaming date, Satellite Rights and more. The most awaited Telugu movie of Danush Jagame Thandhiram, Here are the latest updates including Jagame Tantram OTT Release date, Cast, Trailer, Plot and More. Under Karthik Subbaraj directorial the movie is scheduled for 01 May 2020 release in Tamil and Telugu languages but postponed due to the Covid-19 and Lockdown. The film will simultaneously release in Telugu and other Indian languages whereas the title for Tamil version is Jagame Thandhiram. 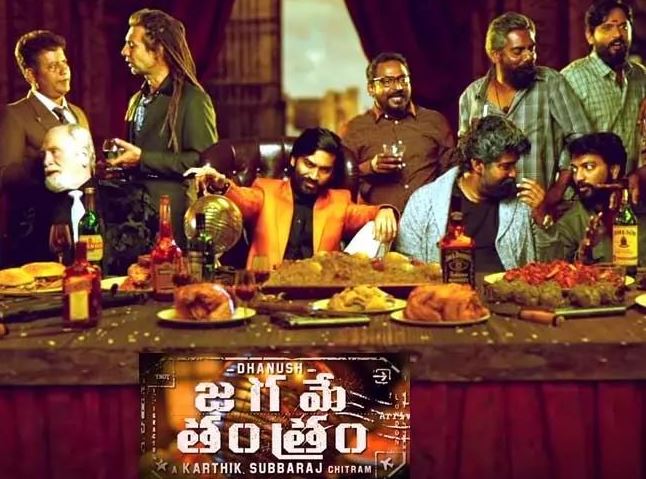 Earlier there was speculation that the makers of the movie might opt for a theatrical release, however, director Karthik Subbaraj confirmed that the film will have a worldwide premiere on Netflix. “Jagame Tantram – A dream film that’s made with all hearts & hard work by the whole team has found a new way to speak to it’s audience. Netflix World premier in 190 countries!!,”

Jagame Tantram is a Telugu dubbed movie starring Dhanush, Aishwarya Lekshmi and James Cosmo in lead roles. Joju George and Kalaiyarasan are playing the supporting characters. There are many exceptions on this film since, it is the first movie in Dhanush and Karthik Subbaraj combination after the super success of Rajinikanth’s Petta. As we all know Karthik Subbaraj is master in designing the characters.

The plot revolves around the life of Dhanush’s character Suruli, a comical and witty gangster. Actor James Cosmo, who essayed the role of Jeor Mormont in Game of Thrones, will be seen in an important role in the action-entertainer. Mollywood actor Aishwarya Lekshmi has been cast as the female lead. The action-entertainer was set to release in May last year, but had to be postponed due to the coronavirus pandemic. The project marks the first-time collaboration between Karthik Subbaraj and Dhanush.

Earlier, there were many rumors surrounding this film regarding the direct OTT release but the makers have refuted the rumors of digital release. But, later Netflix confirmed its direct OTT release, Date will be announced soon. Netflix Bagged Exclusive OTT Rights Of Jagame Tantram for a whopping Rs.55cr. As per the Kollywood Buzz, Jagame Tantram likely to release on Netflix on March 26, 2021.