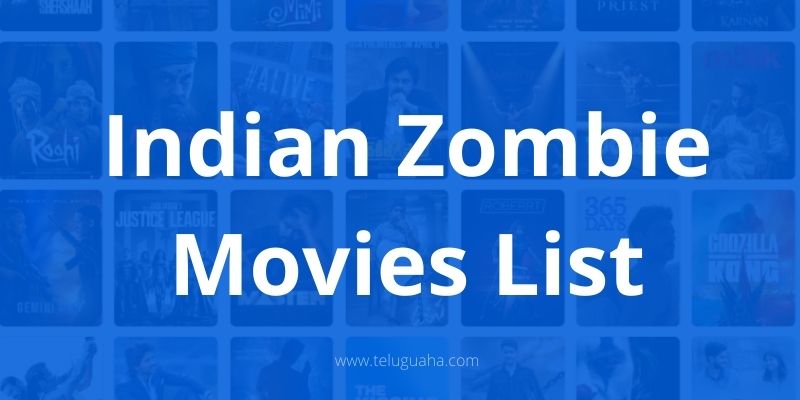 Based ON IMDB reports it is said to have total of 7900 Zombie movies in all over the world Cinema. Bollywood had slowly started adopting Zombie movies from hollywood. Later south film Industry started Making Zombie Film. First zombie movie in Hindi was Go Goa Gone released in 2013. Though Zombie genre has came Long Before in World Cinema, Indian film industry started making it only from Recently.

Here we are giving you the List of Zombie Movies that are released in Indian film Industry. All the Zombie movies of all Indian Languages are Given Below.

Zombie Reddy is telugu film released in 2021. Prashanth Varma directed this Movie. Teja Sajja, Anandhi, Daksha Nagarkar played lead roles in this movie. Story is about.. Teja Sajja who is a Game developer goes to village in Rayalaseema to attend his friends wedding. There suddenly Zombie virus breaks out. A Scientist wantedly creates this Zombie virus to get fame and money. How those friends keep an end to this virus is the interesting part of the movie.

Rise of zombie is a Hindi movie released in 2013. Devaki singh and Luke Kenny Directed this movie while it was Produced under banner of BSI Entertainment and kenny media. Luke kennis and Krithi Kulhari played the lead role. Story is about a Wild life photographer who is more interested in Wild life than Human relations. How he changes into monster is main plot of movie.

Go Goa Gone is another Zombie movie in Hindi released in 2013. Raj and DK directed it while Saif ail khan, Dinesh Vija and Sunil Lull produced it Jointy. Saif ali khan, Kunal Khemu and Vir das played lead role. Story revolves around.. Three guys want to have a rave party and go to one island from Goa. In that island they’ll find all flesh eating Zombies.

Miruthan is a Tamil zombie movie released in 2016. Shakti soundar Rajan Directed it while it was produced by S. Michael Rayappan and M. Seraphin. Jayam Ravi and laxmi menon played the lead role in this Movie. Story is about an intoxicated dog bites a Security guard leading to ba Zombie outbreak in Hill station. Karthik who is a Police officer tries to fina an antidote with the help of doctors.

Zombie is another tamil Horror Movie released in 2019. Yogi Anand and Yashika Anand played lead role in this movie. Bhuvan Nullan has written and Directed this movie while it was Produced jointly by Vasanth Mahalingam and V. Muthukumar. Story of this Movie is.. A Group of friends goes on Vacation to free from their Hectic life. But they where attacked by Zombies there. They’ll also come in contact with a girl named Aishwarya.

Sudhir and Seema, a newly married middle class couple, live a life without hardship while Vishwas, a slum dweller, dreams of dignity for his people. Their lives collide when the town fills up with ominous cries that belong to zombies!
Zombie Movies have coming up in indian Cinema only since recent times. Zombie itself created a separate Genre among Horror Films.