How To Become a Script Writer in Tollywood? Are you waiting for a Script writer Chance in Telugu film industry (Tollywood)? then have a look into this complete article. We will let you know with the details how to quick start your game to become a successful Telugu cinema writer. We all know many of the people in society have an interest to become an actor, director or script writer but most of them doesn’t know how to deal with it. So, we have come up with a step by step article that can help you to become a writer in Tollywood. 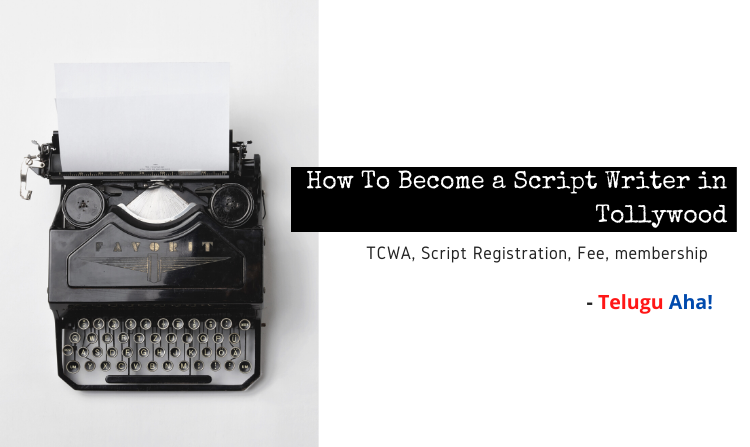 How To Become a Script Writer in Tollywood?

Screenplay writing is one of the toughest task in film making. If you want to become a successful writer in Tollywood then you should know that every script writing job needs a lot of effort. The major aspects of script writing include.

TCWA is the Andhra Pradesh cine writers Associations was established in the years 1990 and recognized by the All INDIA FILM EMPLOYEES CO FEDERATION. It is the non profit body fighting for the injustices faced by new and aspiring cine writers to keep them all in one pace. The prominent writers of the industry like Paruchuri Brothers, Akella Surya Narayana, Posani, etc are active members of it.

A.P cine writers Associations is a non-profit body its membership are in two kinds one is life Member whose name was shown on broad screen as a story (script) writer and the second category as Associate member, whose name was not shown on the screen by the released cinemas.

To write the script you should follow the rules of the TCWA in script writing.

How to Register a Telugu Movie Script in TCWA?

By following the steps below, you can easily register your movie script to Telugu Cine Writers Association.

Every year you have to pay Rs.500/- as the renewal membership fee

How to become a Lifetime Member?

If you wish to become a life member of the association, your name must appear in at least one film.

How To Reach TCWA Office?