Hey Sinamika Movie Review & Ratings: After many Postponemants finally Hey Sinamika movie got released in theatres on March 3, 2022 in Telugu, Tamil, Malayalam and Kannada Languages. As expected movie bagged hit and good response from the viewers as well as Critics. Hey Sinamika is a Pan India film Directed by Brinda. Lets know more about this movie review. 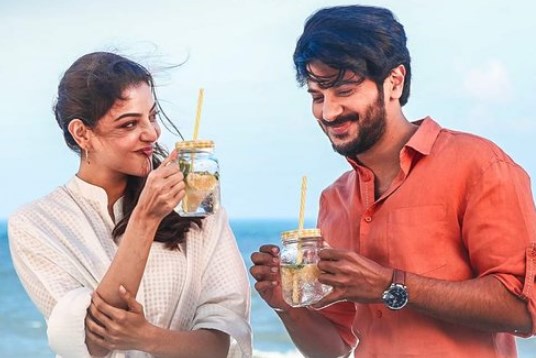 Hey Sinamika is a Romantic Drama film. Dulquer Salmaan plays the role of Software Engineer Yaazhan and Aditi Rao as his love interest Mouna. Both meet love and marry. But their marriage life doesn’t goes out well after some days. Yaazhan comes into contact with Malarvizhi whose role was played by Kajal Aggarwal. How their relationship goes on comes to be an interesting part of the film.

Govind Vasantha Composed Music while Cinematography was done by Preetha Jayaraman and Editing by Radha Sridhar. After many postponements, the movie has been finally getting released on March 3, 2022.

Hey Sinamika is a Must Watchable Romantic Movie. Makers and Directors have come up with a very new story. The audience will feel something new in this movie. Dulquer Samlaans Acting Performance is a plus for this movie. The story and Direction were made well. Hope this movie would have been released in the Hindi language also but couldn’t. Hey sinamika is a Nice Romantic Drama with a New Plot.