Hello World Web Series Review: After the success of Recce and Maa Neella Tank Zee 5 has geared up for another drama web series called ‘Hello World’ helmed by Geetha Subramanyam fame Sivasai Vardhan Jaladanki and Produced by Niharika Konidela under her banner called PinkElephantPictures, However, this 8 episodes office drama has released today in Zee5 so without any delay let’s jump into the in-depth review and find out whether the series is worth watching or not. 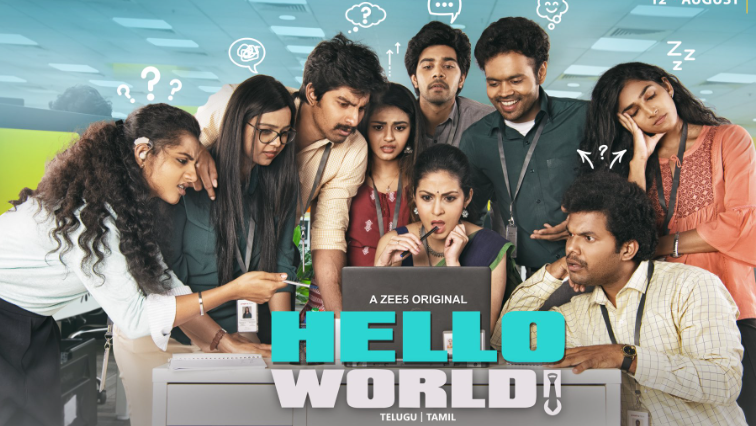 A tale of eight young people who enter a huge IT Company with the belief that their hardships are behind them, only to discover that life has a lot more to offer than they had anticipated, Although the 8 people have their own dreams and struggle finally how they cope up with the situations to achieve their dreams is forms rest of the story.

Office drama series are very rare in Telugu, the genre is mostly used in Hindi but Telugu makers upgraded themselves according to the viewer’s taste and trying to bring unique and engaging content Hello World is one of the decent office dramas ever made in Telugu, the 8 episodes of this series has its own world and I’m sure you will get into that world within 10 minutes of the series starts and one of the main reasons the plot connects every viewer because we have many IT guys out there.

The series starts off well by introducing 8 people’s lives and their conflicts and once all the guys get the job in IT the tale shifts into a big IT company half of the story happened in the company and an IT guy will connect with this whole drama happening in the company, However, over a point, the series gets dragged with repetitive scenes but last 2 episodes saved the series.

Hello World has a stellar cast all are pretty known faces in digital space and everyone, right from Nikhil, and Anil Geela all are performed well as per the story needs especially Aryan Rajesh made his digital debut with this series and he is good in his character and Jayam movie fame Sada also made her digital debut and as strict Manager Prarthana she just killed it and the rest of the cast did their best.

Sivasai Vardhan Jaladanki made previously a series called Geetha Subramanyam which was a big hit though the plot and premise are different we can see the same vibes in this series, however, he succeeded in engaging the viewer throughout the series.

Technically Hello World is good but not as good as Oka Chinna Family Story which was produced by Niharika, Although Raju Edurolu’s cinematography is partly good and he shot IT company scenes pretty well and PK Dhandi’s background score suites for the series and the rest of the technical departments did their best.

Finally, Hello World is a well-made new-age office drama series that can be watched by everyone.