Ginna Telugu Movie Review: Manchu Vishnu, nowadays is known for trolls, However, despite the negativity he again come up with a film called Ginna after the disaster of Mosagaallu, well the trailer and promotional activities raised some buzz, and carrying that buzz the film has finally got released today October 21, 2022, well, let’s delve into the in-depth review and find out whether the film is worth watching or not. 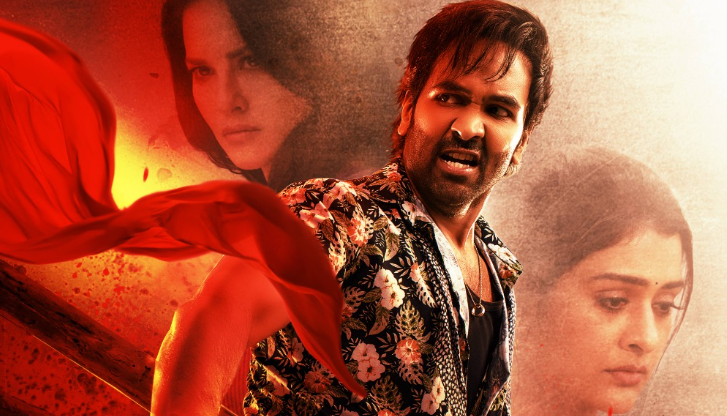 Ginna’s story narrates that Ginna hails from Thirupathi where he runs a Tent house called Ginna Tent House with his friends and he debts few amount to the goon where the problem arises that he should repay or else marry his sister(Sunny Leone), the proceedings he enters into the house where he and his friends experience supernatural things, Finally, what was mystery behind it is forms the rest of the story.

Ginna starring, Vishnu Manchu, Payal Rajput, Sunny Leone, Vennela Kishore, Saddam, and Naresh, the film was directed by Eeshaan Suryah, and Cinematography has done by Chota K. Naidu, Music is composed by Anoop Rubens, and the film was produced by Manchu Vishnu under the banner of Ava Entertainments.

Vishnu Manchu who became famous with trolls more than his films, whether it is directly or indirectly it became an advantage for the movie pramoti0n. Despite the fact that for the first time Vishnu tried an outdated genre called Horror Comedy, The movie has nothing fresh to engage the audience from start to end, few comedy scenes make you chuckle, but after a while, it becomes like Jabardast comedy, still it will not save the movie in the coming days.

While watching the film we might feel the treatment of the movie is outdated as we have seen many films with the same format like a hero introduction, then a song, a few comedy scenes with his friends, falling in love with a girl and a hero encountering a problem, that’s all, The first half went with few engaging comedy scenes and boring screenplay and makers felt that interval bang makes the audience to watch second half but the genre itself is outdated so we won’t get any curiosity.

The second half completely focused on horror elements with a mystery around scenes that were good for a while though all outdated, the pace of the movie dips in the second half with forcible comedy and routine scenes, and the core emotion also didn’t land well.

Manchu Vishnu as Ginna is good at a few comedy scenes as it reminds his one and only successful film Dhee, but apart from comedy he failed in entertaining the audience, Payal Rajput has nothing to do with the role as her character is designed only for intimate scenes, Sunny Leone is good at few portions, as usual, she shines with her glamour and rest of the cast Vennela Kishore,  Saddam, Naresh did their part well.

Debutant Suryaah has completely failed in making the film in an engaging way to the audience, as Kona Venkat provided the story is completely outdated and we can see in some portion of ‘Dookudu’ resemblance, sadly none of the elements helps the film.

Technically, Ginna is below average as Chota K Naidu failed in providing good visuals as we can some unnecessary lighting in the shots don’t know why? better he should retire or update himself and Anup Rubens completely failed in giving songs and BGM.

Overall, Ginna is an outdated Horror Comedy that has no comedy and no Horror, by the way, watch it at your risk