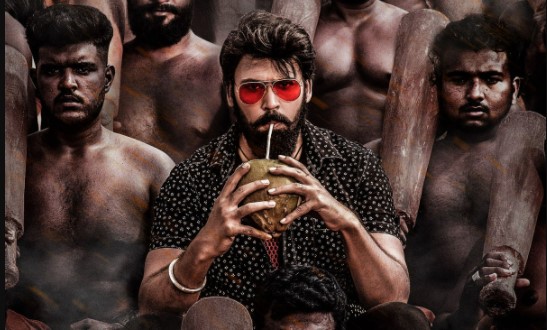 Gangster Gangaraju seems to be an Action paced Drama movie. Story wasn’t revealed by writer or Director of this movie. First Look Poster was released recently. Actor Laksh appears like a don, sat between body builders and Drinking Coconut water. In another Previous Poster he was hand cuffed.

Sai Karthik Composed Music while Cinematography was being handled by Kanna PC. Makers have announced that First Glimpse of the movie will be release on the Occasion of Vinayaka Chavithi i.e. on 10th September 2021.

Gangster Gangaraju Movie is at present in PostProduction Shedule. Only First Look poster was released till now. Makers didn’t announced anything about Theatrical Release dates or OTT Rights. Movie may Come out in theatres by the end this year. First Glimpse of the movie will be released on 10th September 2021.

Ganster Gangaraju’s Release dates will be announced by film makers soon before the first Glimpse. Chadalavada Laksha earlier entertained us with his thriller film Valayam which was release in 2020. He is again back with energetic look in this movie.