F3 Movie Review: Venkatesh and Varun Tej’s F2 was the biggest hit and it became the biggest comedy franchise in Telugu, H0wever, with the success of F2, Anil Ravipudiu come up with F3 as a lot of fans have been waiting for its release, as we all know F3 has postponed several times due to pandemic but now finally the has released between humongous expectations, so let’s delve into the in-depth review, whether the film lives up to the expectations or not. 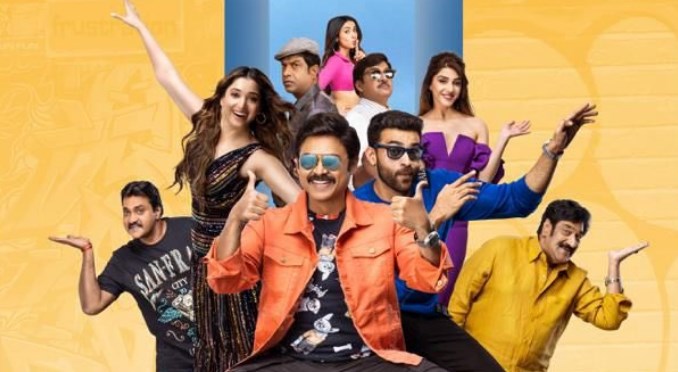 F3 story revolves around money, where Venky(Venkatesh) and Varun(Varun Tej) start facing financial problems because of their wives’ expenses, However, Venky and Varun decided to start a hotel business to cope with their losses but things take a different turn when a big shot visits their hotel, eventually, it leads to a big fraud business but unfortunately, Venky and Varun get involved in this situation because to Harika’s(Tamannaah) greedy family. Finally, How did Venky and Varun gets out of this situation is the rest of the tale.

F3 starring, Venkatesh, Varun Tej, Tamannaah, Mehreen Pirzada, Pooja Hedge, Sunil, Murali Sharma, Pragathi, Raghu Babu, and others, and the film was directed by Anil Ravipudi, Cinematography has done by Sai Sri Ram, Music has composed by Devi Sri Prasad and the film produced by Shirish and the film presented by Dil Raju.

Comedy films don’t need a story as the makers’ ultimate intention is to make the audience laugh and the Audience also, if they enjoyed the comedy then don’t even think about the story, However, F3 falls into the same category, F3 doesn’t offer a great story but I’d say it is a paisa vasool cinema, just because of comedy, Comedy worked out very well in the film.

However, the film’s narrative starts off with Murali Sharma’s voice-over that tells the importance of money as he says if someone has money he can make fun of and enjoy and if someone doesn’t, he gets frustrated and that’s exactly the central point of the film. However, the film falls flat after 30minutes as the story didn’t go forward, as we feel like we are watching comedy bits, the first half ended with key characters’ introduction and their flaws with comedy scenes, as we can see some story in the second of but that didn’t land well, but what worked in the second half is the twist of Sonal Chauhan, finally, the film ends with comedy.

F3’s biggest backbone is Venkatesh and Varun Tej, this time Anil Ravipudi added some defects to their character like Venkatesh has night blindness and Varun Tej has a stammering problem and Venkatesh again nailed it with his brilliant performance, he engages you in every frame and Varun is nor less, as he tried to match with Venkatesh in every scene and he effortlessly pulled it off, Tamannah as Harika has done well this her character has new shade which will shock at the pre-climax and Mehreen as Honey is just okay, Murali Sharma and Sonal Chauhan are the new entries in this franchise and they did well their respective roles and rest of the cast done well.

Anil Ravipudi is a master of making comedy films as he makes any movie he tries to incorporate comedy and that’s what made him a successful director, However, to talk about F3, we can clearly understand while watching his ultimate moto his to entertain the audience with his comedy as he himself didn’t try to tell a story but this time he tried to give a message about money, However, he succeeded in engaging the audience.

Technically F3 looks brilliant as Sai Sri Ram’s cinematography is just okay and DSP’s music is not up to the mark F2 songs and background music was better than F3 and the rest of the departments did well as per the film requirement.

Finally, F3 is a must-watch film only for comedy.