Drushyam 2 Telugu Movie OTT Release Date: Drushyam 2 (2021) is the Telugu remake of Malayalam film Drishyam 2 directed by Jeethu Joseph. The Malayalam film was released directly on OTT platform without going for Theaters. But, now the makers are planning to release the Telugu version into Theaters as per the Malayalam movie feedback from audience. Suresh Productions and Aashirvad Cinemas producing the film jointly and planning to release the film in mid, 2021. 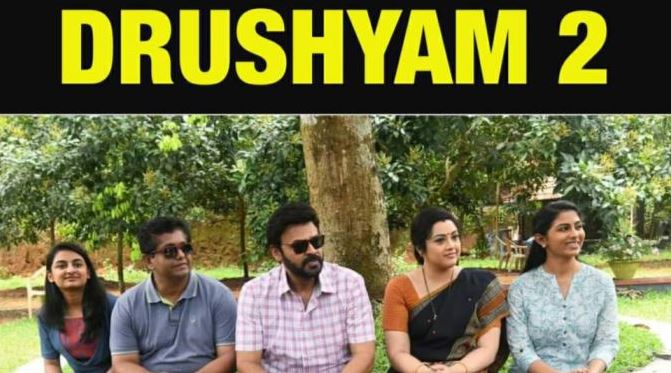 Victory venkatesh has already completed his shooting part for Narappa, F3 and now Drushyam. He is in a jet speed and looking for a successful year 2021. His last film F2: Fun and Frustration has joined Rs.100 crore club. Now he is aiming for more than Rs.300 Crore Gross with these 3 films.

With the super success of Drishyam 2 Malayalam film on digital streaming platforms, many people said that it would be a blockbuster if it was released into theaters, in this way the makers have missed some golden opportunity. However, the makers want to release the film in theaters with its Telugu remake “Drushyam 2”. The same production company which produced Malayalam film joined hands with Suresh Productions and RajKumar Theatres to produce the film in Telugu. The main cast of the film includes all the same artists from Drushyam first part.

Venkatesh has finished the shooting portion for Drushyam 2, The film has to complete another 50% of shoot with other artists, planning for July, 2021 release. The Drushyam 2 Digital Streaming Rights were not disclosed by the team.

As always, we will keep you updated on the future of Drushyam 2 digital streaming rights and Drushyam 2 OTT Release date and more.