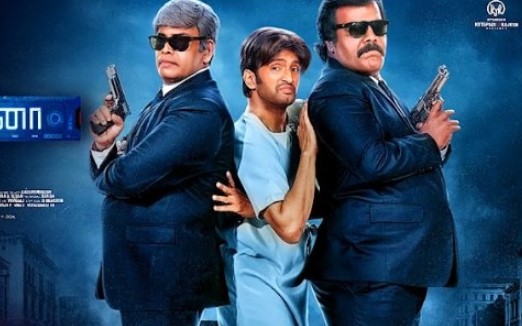 In this movie we are going to see Santhanam who is known for his comedy roles in various movies in a very unique role. He will be playing triple role in the movie and there will be time travel involved as well.  Recently we got the update that the movie is going  to release by 10th September 2021 on OTT platform directly.

The Movie Dikkiloona is a scientific fiction comedy in which we are going to Santhanam playing an unique role. He accidentally time travels to another year and he is stuck there. Even the story is  set in a completely  different timeline, with the help of a time machine which is invented by three mad scientists.  These scientists  are trying their best v to stop him from making a big mistake in his life which could completely turn him around.

What is the mistake that he has made? Will he come back to his original timeline? That is what the rest of the story is all about.  For the first time ever Santhanam is playing triple roles in three different time periods. So it is going to really very interesting.

In this movie we are going to see Santhanam we know from many movies, Yogi Babu, Anagha, Shirin Kanchwala, Harbhajan Singh, Anand Raj, Munish Kanth, Motta Rajendran, Arun Alexandar and many others.

The Movie was supposed to release in theatres way back. It was announced few years ago. But because of various reasons and now the Pandemic, the makers of the movie have finally came to an  conclusion to release the movie on the OTT Platform itself. The Digital Rights Of this movie have been brought by Zee 5 App for a whooping price. The Satellite Rights of the movie information is yet to be revealed by the makers. Once we get that we will update the details to you..

Soon the official announcement of the movie Satellite Rights will be revealed. We are quite sure that the movie can be watched with family and they can have a lot of fun while watching this movie.  As of now, It is confirmed that the movie is releasing on the Zee 5 App OTT Platform on 10th September 2021. This has been officially mentioned very recently.

The Movie’s release date has been mentioned very recently and that is on 10th September 2021. . Once we get the Satellite rights details of the movie we will get the first news to you. Till then stay tuned.