Dhanush Telugu Dubbed Movies List Till 2021: Dhanush is not only a PAN Indian actor now he is a PAN World actors. His entry in to the most anticipated Hollywood film “The Gray Man” has been confirmed similarly his third straight Bollywood film “Atrangi Re (2021)” is scheduled for a PAN India release in 2021. In addition to these movies he has been coming up with a big lineup of Tamil movies like Jagame Tandiram, Karnan, Naane Varuven and untitled project with Karthick Naren. So, we can expect some great films from Dhanush in the near future as well. On this page, we are going to list down the Dhanush Telugu Dubbed Movies List Till 2021. 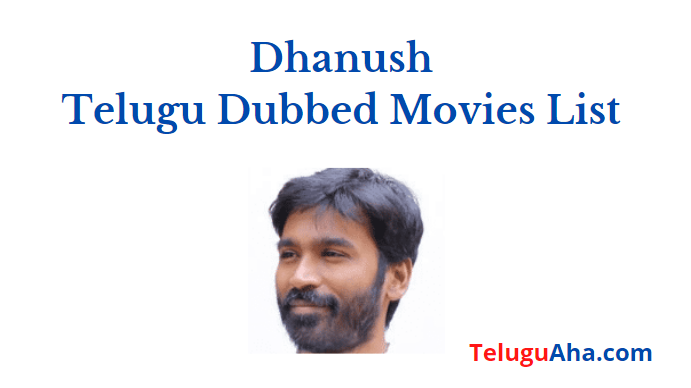 In the earlier posts, we have listed the Dhanush Hindi dubbed Movies and now it is for Telugu Dhanush fans who are searching on Internet for Dhanush Telugu movies. Have a look into the below table.

National award winning Tamil hero Dhanush is popular among Telugu audiences for his movies such as the VIP franchise, 3, Anekudu, Mari and Maryan etc. The actor’s many Tamil films are now available in Telugu language.

Dhoolpet (a dubbed version of the Tamil movie Puthupetta) is about the life of a gangster. Yuvan Shankar Raja and Arvind Krishna (camera man) are an asset to the director Selvaraghavan. Still the movie is a classic in Tamil Cinema and released every year in Tamil Nadu theaters on New Year Day.

Dhanush’s 2013 film ‘Maryan’ also released in Telugu with the title Mariyan. It is a survival film starring Dhanush and Parvathy in lead roles. AR Rahman music is the biggest asset for the film.

Three is a disaster when first it was released but it was picked very well and reported as one of the best films in Dhanush film career as an actor.

Don’t ever Miss this film, Mayakkam Enna’s Telugu dubbed version has been Mr. Karthik. The film is a romantic musical and it stars Mirchi girl Richa Gangopadhyay as the female lead. Dhanush’s brother and popular director Selvaraghavan is the film’s director.