Daggubati Abhiram Biography: Here is the Wiki of Daggubati Abhiram, His Biography, Age, Family, Upcoming Movies & More. Daggubati Family is a prominent Telugu family with a history in Telugu cinema, which began with veteran producer Daggubati Ramanaidu, is one of the most powerful families in Tollywood and is also related to the Akkineni family. 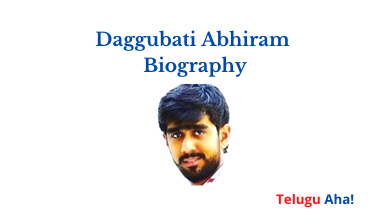 The Family owns Ramanaidu studios in Hyderabad ad Theaters across AP & Telangana. Daggubati Abhiram is the grandson of Daggubati Ramanaidu and son of D Suresh Babu.  His brother Rana Daggubati is a popular actor across India while his Uncle Venkatesh is one of the Top stars in Tollywood till date.

Daggubati Abhiram will make his debut as a hero in Tollywood under the direction of Teja. Earlier, there were many news items circulated on the Internet that the actor wanted to make his debut with the sequel of the Ladies Tailor but it did not happen. The latest Tollywood buzz is that Krithi Shetty is in talks to play the love interest of Daggubati Abhiram i the film.

Abhiram Clarification Over His Controversies

Abhiram said in an Interview that ‘Everyone will make mistakes in their life but the mistakes that I have made came out’. I learned a lot of lessons from these mistakes. My family was always with me during that time. As I wants to start career as an actor in Tollywood, I don’t want to make such mistakes again in the future.