Cinema Bandi Movie is Now Streaming on Netflix: D2R Indie, Raj & DK’s (Raj Nidimoru and Krishna DK) latest venture in nurturing budding filmmakers, launched the trailer of an independent Telugu comedy drama, Cinema Bandi. The trailer was released exclusively on Netflix India this Friday, and will start streaming on May 14, 2021. 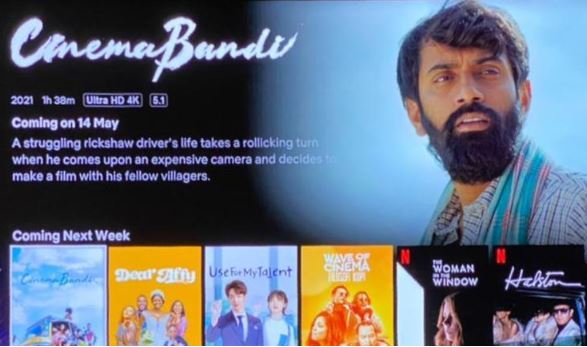 Raj & DK’s are known for India’s first zombie film “Go Goa Gone,” Horror film “Stree” and for the much-acclaimed web series “The Family Man.” They have delivered numerous path-breaking content with an unorthodox understanding of the world they create, earning them the reputation of being a maverick duo!

Cinema Bandi (translating to “The Film Cart”) is for all cinema lovers. “After all, everyone is a filmmaker at heart. Especially in our country,” muse Raj & DK. And the film proves just that. In the words of Raj & DK, “It’s grassroots filmmaking at its most basic — shot by a bunch of friends — just 10 people, some of them who also doubled as actors. That’s how an indie is made!”

The film is directed by first-timer Praveen Kandregula and written by Vasanth Mariganti. The film stars an ensemble of professional and amateur actors, including Vikas Vasishta, Varanasi Sandeep Kumar, Rag Mayur, Uma YG, Sindhu Sreenivasa Murthy, Siri Vennela, Trishara. And the music is composed by another first-timer, Sirish Satyavolu.

Cinema Bandi is based on an idea that “everyone is a filmmaker at heart”, the youtube caption of the trailer reads “There’s more story behind the scenes than what meets the eye on-screen”. The film takes place in a village on the border between Andhra Pradesh and Karnataka. The villagers speak in a curious mix of Telugu and Kannada – a strange dialect that has never been shown on screen.

Cinema Bandi explores the story of a shared motorist who finds a camera in the backseat of his rickshaw and decides to rally his village and make a film, “picchar” as it is called. Of course, no one remotely knows anything about making a movie. But they have vast experience in watching movies, their intelligence and various ways of “jugad”. How hard can that be !? The film details their hilarious journey of ups and downs as they make their innocent home movie.

Cinema Bandi movie OTT release date scheduled for May 14, 2021. As always, we will keep you updated on the future of Cinema Bandi and the official release date for the movie if anything changes.