Bullet Train Telugu Dubbed Movie Review: Brad Pitt is one of the brilliant actors in Hollywood as his latest action drama ‘Bullet Train’ captivated the audience with the trailer since the Dead Pool director directed the film the expectations got twofold, However, The novel “Maria Beetle,” by Japanese author Kotaro Isaka, served as the inspiration for the film “Bullet Train.”Despite the fact, that the film got released one day before as the film will be released in the USA on August 05, 2022, Although, the film has been getting some solid response from the audience and critics as well so without any delay let’s delve into the in-depth review of Bullet Train and find out whether the film is worth watching or not. 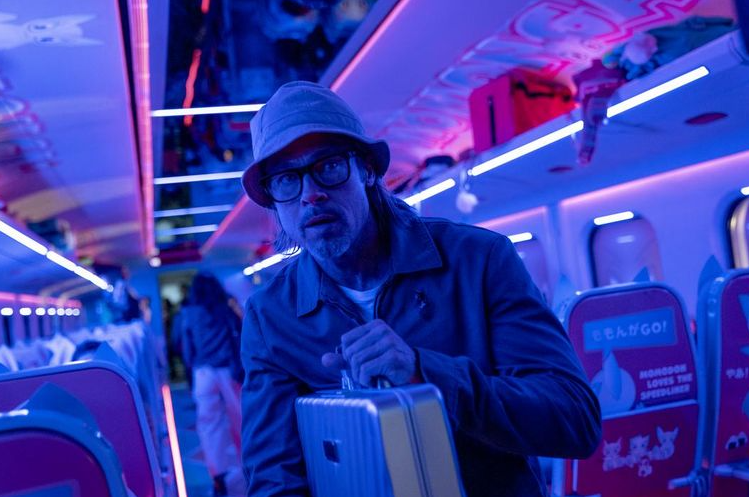 Bullet Train depicts the story of LadyBugg(Brad Pitt) who is the world’s most talented assassin as he decided to quit his job due to the overwhelming amount of deaths, however, before he quit, he is summoned for one more job, which requires him to take a briefcase from a high-speed train from Tokyo to Morioka but things get complicated in the train when he finds 4 skilled assassinates, Finally, will he collect the briefcase is forms rest of the story.

Watching Movies with a train backdrop always excites us as we have seen Train to Bhushan which was one of the well-made edgy thrillers, Though Bullet Train is not like Train to Bhushan However, it filed more of fun rather than a thrill, the movie starts off well with introducing protagonists world, the movie seems flat until protagonist gets into the bullet train after he gets into the train audience will experience multi genres which means the story frequently shifts one mood to another mood sometimes its good to watch when fun happening in the scene and abruptly changes into a serious mood but it’s good to watch for a while and its a tough task to the audience to watch the whole movie.

It has an exciting plot but David Leitch failed to hook the audience from start to end as it partly engages with some fun moments and innovative action blocks, However, this kind of film demand a pacy screenplay but it ended with a draggy screenplay, although, the film has some fun elements worked out quite well, However, worlds finest assassinates snatching a briefcase seems silly for while but once the conflict confronts it becomes interesting.

Brad Pitt as LadyBugg shows his mettle in his acting, as he shines quite well in most of the scenes, however, Aaron Taylor got some stuff to perform and the rest of the did well as per the film requires.

David Leitch is known for Dead Pool, he is partly succeeded in engaging the audience, his writing is good but he failed in the execution and what I found is the emotional point didn’t land well as he could have worked on that.

Technically Bullet Train looks top-notch as Jonathan Sela’s cinematography is the major asset of the film his use of colors in every scene helped the audience get into that mood and Dominic Lewis’s background score is good but it could have been better and editor Elisabet Ronaldsdottir could have chopped draggy scenes at the beginning and the rest of the technical departments did their best.

Finally, Bullet Train is a fun film with a blend of a few action blocks, and the movie is strictly for those who love action films.