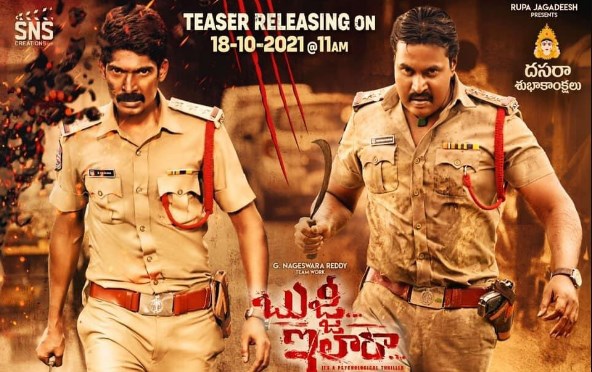 Bujji Ila Raa is a Psychological thriller Drama as it is mentioned as Caption to movies title. Dhanraj and Sunil appears as Police officer. Story revolves around kids getting kidnapped and murdered in Warangal City. Both these Police officers chase to nab the kidnapper. In this course unexpected things comes to know to both the police officers that kidnapping is being done with the support of Police department. will they caught Criminals, what happens is going to be the Crux part of the movie.

Chandini Tamilarasan Played female lead role. SNS Creations LLP bankrolled this Project under its own banners. Director Garudavegi anji along with Directing has done Cinematography for this movie. Sai kartheek has composed music.

Bujji Ila Raa movies Theatrical Release dates and OTT Details aren’t announced by the film makers as of Now. Trailer was released on 18th October 2021. After playing Comedian roles both Dhanraj and Sunil are going to appear in serious Police officer characters.

Bujji Ila Raa Movie is getting Positive responses from critics. Shooting and Postproduction part of the film has almost completed. Movie may hit big Screens by the end of this year 2021. OTT Release date can be expected in December or 2022.