Buddy movie OTT Release Date, OTT platform, Cast, Time, Trailer, and many more details can be checked in this article. Buddy is expected to hit the screens on September 10, 2023. Telugu heroes have been announcing back-to-back films though they are busy with multiple films, and now they make sure that the content should be universal, and in order to reach a larger audience universal content is the key. However, as we all know after Prabhas now Ram Charan, NTR has been making headlines with RRR as they are campaigning for the film to be Oscars in a way they have got immense popularity all over the world. 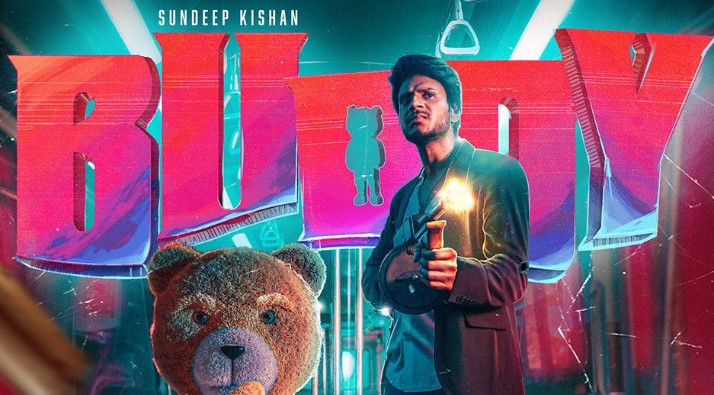 With Pushpa, Allu Arjun became a pan India star and now tier 2 heroes have also been trying to make Pan India films, and young and talented actor Sundeep Kishan joined the race with the film called Michael which is going to be released on February 03, 2023, in all south Indian languages and he is now geared up another Pan Indian film called ‘Buddy’ helmed by Sam Anton, this film is touted to be a sci-fi film and expected to be hit the screens in September 2023, however, stay tuned to know more about the film.

On the occasion of Sankranthi, the makers, have dropped the first look poster of Buddy, though it reminds Aarya’s Teddy film, but it looks interesting as Sandeep Kishan holding a fire gun and a Teddy stands beside him. Buddy is currently under production and 20% of the shoot has been done by the makers, still a lot to be shoot but due to the hectic schedule of Sandeep Kishan’s upcoming films, the film had to hold for a while.

Buddy’s regular shoot will resume after the completion of Sundeep Kishan’s current commitments as he is been busy now promoting his upcoming film called Michael which is going to hit the screens on February 03, 2023. However, as per the sources Buddy is expected to hit the screens on September 10, 2023. If everything goes as planned Sundeep Kishan will deliver 3 films this year and lets for the best for his career.

Buddy ott release date is tentatively 10, December 2023 but the Digital rights details haven’t anounced yet. Sandeep Kishan is the most underrated actor in Tollywood as he made his debut with the film called Prasthanam where he is not a main hero but was praised for his performance, from then to now he did many films and many films were has good success rates but for the past 3 years, he has been facing a bad time with his back to back flops and in he hasn’t released a single movie in 2022, despite the flops his pipeline for 2023 will blow you’re mind for sure.

Sundeep Kishan has been busy with multiple films like Michael which will be released on February 03, 2023, Ooru Peru Bhairavakona helmed by VI. Anand who did a film called Tiger with Sandeep Kishan, he is been part of Dhanush’s Captain Miller and now Buddy. However, talking about Buddy’s digital rights the film’s digital rights were acquired by the leading OTT platform Netflix.

Speculations are going around the media that Buddy is a remake of Aarya’s Teddy but Sundeep Kishan said in an interview that Buddy is not a remake as the film has its own story the only point related to Teddy is the Teddy bear, however, Buddy is touted to be sci-fi film which runs the whole story around the Teddy, however, the film has solid action block that will be a visual feast for the audience.

Buddy will be shot in simultaneously in Tamil and Telugu and released in Hindi, Malayalam, and Kannada, as the leading OTT platform Netflix has anounced before the official announcement, as Netflix has acquired most of the film’s digital rights and Buddy is one among them. However, talking about the Buddy OTT release date, it’s too early to anounce the OTT release date as the film is expected to hit the screens in September 2023 and we can expect the OTT release date after the 6 weeks of the theatrical run until then stay tuned with us.

Buddy makers haven’t divulged what the story is about and as we go by the first look the film is touted to be a sci-fi actioner where the story runs around Teddy. Buddy will have all the elements which will surely engage all sections of the audience.

Sandeep Kishan plays the lead role and the rest of the cast will be anounced soon, the film is directed by Sam Anton, Hip-hop Tamizha composes the music, Krishnan Vasanth is the cinematographer, and the film is produced by G. Dhananjeyam, Neha Gnanavelraja and AG Raja under the banner of Green Studios.

Buddy makers haven’t dropped the trailer yet and we can expect the trailer to be dropped very soon.

When is Buddy OTT Release Date and Time?

Not Declared, Buddy movie makers have not yet announced.

Where can we watch Buddy?/ Where Can I see Buddy?

Not Declared, Buddy movie makers have not divulged yet.

Is Buddy hit or flop?

Not Declared, Buddy movie has not been released so we can not say Hit or Flop

Is Buddy Movie available on Netflix?

Is Buddy available on Prime Video?

Is Buddy available on Aha Video?

Is Buddy Movie available on Hotstar?

Buddy is billed as a sic-fi action entertainer that is expected to be released in September 2023.