Bobby Simha Telugu Movies List Till 2021: Many of the Telugu people may not aware of the name “Bobby Simha” but known to be as Disco Raja Villain. Bobby Simha made good no.of movies in Tamil Film Industry and known for cricitcally acclaimed roles. This national award winning star made debut into Telugu Cinema in a full length role in Ravi Teja’s Disco Raja as a villain. His recent Telugu film “Gully Rowdy” is about to release in Telugu and Tamil languages. 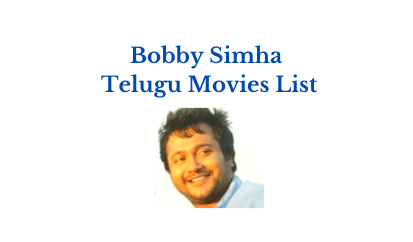 Like Vijay Sethupathi, Bobby Simha also committed to do any type of roles with some importance. Playing negative shade roles is not new to Bobby Simha. Earlier, he played negative villain roles in movies like “Saamy 2′, Rajnikanth’s Petta and many other films. Now he is focusing in both Telugu and Tamil films.