Blue Whale Movie OTT Release Date: Blue whale is the first South Indian Movie on Gaming and Cyber Crime. Actress Poorna Playing the Main lead role as Lady Police Officer in this Movie. T Ranganathan is the Writer and Director. Release Dates and Ott rights of the movie aren’t announced as if now. Blue whale will be releasing in Tamil and Telugu languages. 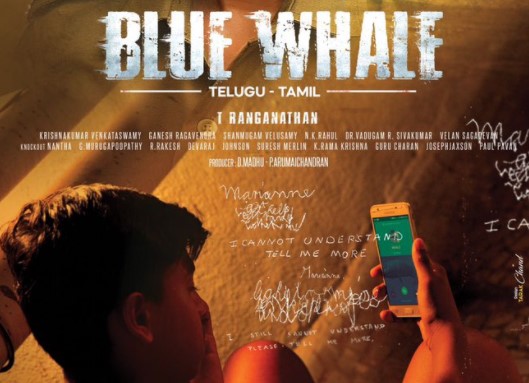 Blue Whale movie is based on the Real Incidents that happened in society in 2018 and 2019 year. Everybody knows that a video game Called Blue whale has taken many lives of children. Children got attracted to the Blue whale and many committed suicides. The Blue whale Hypnotises and asks the Player to do whatever it says. Who are behind Blue whale game why are they doing these crimes has been investigated by Indian Cyber Security teams. This Blue whale movie is going to depict all these incidents in this movie.

Actress Poorna is playing the main lead role. Kabishkanna, Birla Bose, Divya, Hariharan and others Plyaing Supporting roles in this movie. Ganesh Raghavendra is Composing Music and Cinematography is being handled by Krishna Kumar.

Arumaichandran and D. Madhu Jointly Bankrolling this film under banners of B’yond Entertainments and 8 Point Entertainments. Blue whale is Longwaited movie. Trailer was released in 2019. Since then movie release was getting postponed because of Pandemic restrictions.

Blue whale film Release Dates and Ott Rights aren’t announced by any of the makers. Trailer of it was released in 2019. This is a message oriented movie. Whole story relates to the real incidents that happened in Society.

Blue whale is a Small Budget movie. There are chances for releasing this movie directly on OTT Platofom. Blue whale will be released in Tamil and Telugu language. OTT or Theatre Release dates may be announced soon.

Watch Latest Movies in theatres or on OTT’s Only. Downloading Movies from Piracy sites is Illegal and may face Serious Legal Conseqences. Say No to Piracy and Be Safe.