Bindu Madhavi Wiki and Biography: Bindu Madhavi is an Indian actress and model who has been in movies made in both Tamil and Telugu. On the 2017 season of Bigg Boss in Tamil, Bindu was a guest. 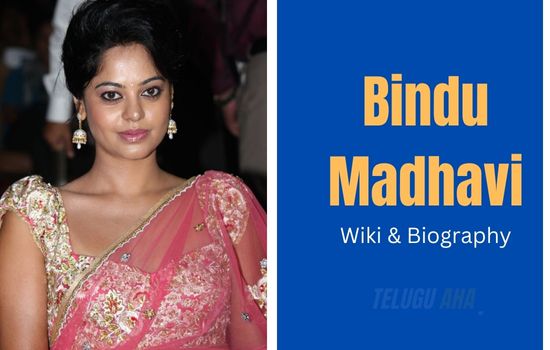 The actress Bindu Madhavi is well-known in both the Tamil and Telugu film industries. She works both in movies and on online shows. The movies “Press 1 for Tamil,” “Pakka,” and “Kazhugu 2,” as well as Bindu’s web series “Masti,” have brought her the most attention.

After finishing school, Bindu Madhavi went to the Vellore Institute of Technology in Vellore, Tamil Nadu, and got a Bachelor of Science in Biotechnology.

Bindu Madhavi is a well-known Indian actress who usually works in Tamil and Telugu movies. She was born on July 3 in Hyderabad, Telangana, India, which is also her birthday. As she grew up, her family moved around a lot because her father was a commercial tax deputy commissioner. They lived in places like Hyderabad, Tirupathi, Nellore, Tenali, Guntur, and Vijayawada before settling in Chennai, Tamil Nadu, India.

Since she was a little girl, Bindu Madhavi has wanted to be an actress. She started working in the field while she was still in college. At the Saravana store, she posed for sarees. She became friends with well-known photographer Venket Ram over time. Bindu Madhavi’s photo shoot was done by Venket. Bindu was a model who was in commercials for brands like Tata Gold Tanishq that were shown on TV. She was a model who walked the runway and was in many magazines and TV shows.

In 2011, the Tamil movie Veppam gave her the chance to play a sex worker. Even though the reviews of the movie weren’t great, a critic for Rediff.com said that Bindu “does really well and manages to keep our attention.”
Bindu’s first big role was in the Tamil movie Kazhugu, which came out in 2012.

Bindu had a good year in 2013. She had parts in the Tamil comedies Kedi Billa Killadi Ranga, Desingu Raja, and Varuthapadatha Valibar Sangam. Bindu was in the Tamil movie Oru Kanniyum Monnu Kalavaniyum, which came out in 2014. She was in two movies that came out in 2015: Tamizhuku En Ondrai Azhuthavum and Pasanga 2. Bindu was in two movies in 2016. She was in Pakka, a romantic comedy, and Jackson Durai, a horror comedy.

In 2017, Bindu was on Kamal Hassan’s reality show Bigg Boss, which is in Tamil. Bindu’s career took off after she was in Tamil Big Boss. She started doing TV commercials, movies, and promotional events. She had a part in the 2020 Telugu online series Mastis.