Bhola Shankar Movie OTT Release Date: Mega Star Chiranjeevi’s another Upcoming movie Bhola Shankar’s Title was released on the Occasion of this 66th Birthday on 22nd August 2021. This title was revealed Coinciding Raksha Bandhan Festival. Keerthi Suresh is Playing the role of Sister for Chiranjeevi. Meher Ramesh is the Director of this film. 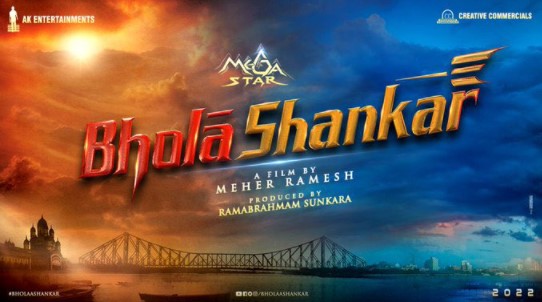 Full Story of Bhola Shankar wasn’t revealed by any of the film Makers. But Earlier it was Confirmed that Bhola Shankar is Completely an Official Remake of Ajith’s tamil “Vedalam” (2015) Movie. Chiranjeevi will be working as a Taxi driver to meets his ends and leads a Peacefull life with his Sister. His Sister will be Pursuing her Studies. One day Chiranjeevi helps Polic in knocking down three Criminals. Later by this case it will be revealed that Chiru had a Criminal record in the Past, and also has a motive in Dismaltling the Mafia to Protect his Sister.

Keerthi Suresh is Playing the Role of Sister for Chiranjeevi. Rama Brahmam Sundara is Producing this film under Banner of Ak Entertainments. Other lead characters Names are yet to be revealed by Movie Makers.

Bhola Shankar is going to be the 155th film for Chiranjeevi. This Movie is also the first Collaboration of Chiru and Meher Ramesh. Meher Ramesh on Twitter said that “His dream has come true” By Directing Chiranjeevi’s Movie.

Bhola Shankar Movie Still didn’t wen on floors for Shooting in full Scale. Director Meher Ramesh said that they start making it after Completion of Chiru’s Present Movies. Currently Chiranjeevi is busy with God Father Movie. His Achary still didn’t got released. Bhola Shankar is Expected to release in 2022 itself.

At Present there are no Chances for Bhola Shankar Movie to get released in this Year 2021. Shootin of this movie may start at this year end. As if Now Title was revealed. Still Makers have to Confirm the details of Female lead actors and Supporting Actors names. This Movie will release in Theatres first in 2022 itself.

Mega Star Chiranjeevi is Busy with Number of Movies at Present. His most awaiting film Achary is still yet to release. Recently Revealed God Father Movie’s Shooting is also yet to began. Meher Ramesh Directing Bhola Shankar’s Shooting will began as soon as he Completes his Current Projects. After Couple of years Back, Chiru is again Busy with More number of Movies.