10 Best Thriller Movies in Telugu of Recent Times – From Nani’s Gentle Man to Vishwak Sen’s HIT, Here is the List

Best Thriller Movies in Telugu: Action, Romance and Comedy Genres are the most popular genres in Telugu Cinema along with Suspense Thriller Movies. Tollywood has gained its prominence over the last few years and was succeed in bringing the best content to Telugu audience. 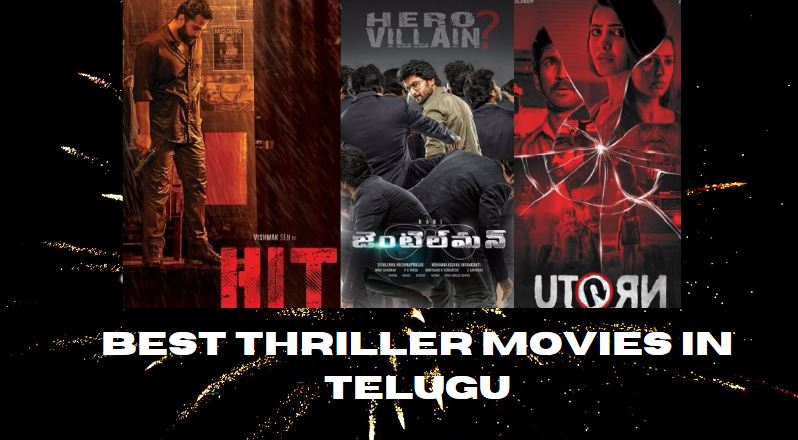 Tollywood owns some of the new age filmmakers with the art of delivering a heightened feelings of suspense, excitement and surprise to audience with their script and gripping screenplay. So, we have made out a list of the Best Telugu Suspense Thriller Movies that you should definitely watch during this lockdown.

India is on lockdown in most of the states due to the second wave of Corona Virus. While this is not the most ideal situation, there is a way to make the best use of this self-isolation period. If you are a Telugu film lover and are looking to delve into Thriller genre, then you are at the right place. Today, we have a list of intense and engaging Telugu movies that will make sure you stay at the edge of your seat throughout.

Best Thriller Movies in Telugu Till 2021

If you are searching for the recent suspense thriller movies of 2020 in Telugu, then don’t miss HIT The First case directed by Sailesh Kolanu starring Vishwak Sen & Ruhani sharma in lead roles. HIT is definitely one of the best Thrillers that will keep you on the edge of the seat, with a tighter narrative, screenplay and performances.

One of the most engaging Thriller completely shot in United States. Gatham is the latest Psychological Suspense Thriller film directed by Kiran Reddy and starring Bhargava Poludasu, Rakesh Galebhe, and Poojitha Kuraparth. This is a low budget film with new cast & crew but with an extraordinary screenplay and cinematography. Gatham (2020) is a film that is entirely based on its Screenplay. The first half of the film is so exciting to the audience and the Twists in the Second Half goes deeper and reveals the suspense.

One of the rare film’s of its kind in Telugu Cinema. Madha (2020) is a Telugu-language Suspense thriller film directed by debutant Srividya Basawa starring Trishna Mukherjee, Anish Kuruvilla and Rahul Venkat in prominent roles. The movie starts with misleading scenes but told in a gripping way to the end. The Twists in the second half increases the suspense little more with a decent screenplay.

Nowadays it’s a hard task to make the audience to stick to their seats in theaters if the movie is not engaging. Only movies like Agent Sai Srinivasa Athreya can make the Impossible possible. Agent Sai Srinivasa Athreya (2019) is a Telugu Suspense Thriller film written and directed by Swaroop RSJ and produced by Rahul Yadav Nakka. The film stars Naveen Polishetty, Shruti Sharma, Darbha Appaji Ambarisha and Suhas in main roles.

Though the story of Evaru is based on the Spanish film “The Invisible Guest”, it has its own Essence in telling the story in a gripping screenplay to the Telugu audience. Evaru is a Suspense crime thriller film directed by Venkat Ramji starring Adivi Sesh, Regina Cassandra, Naveen Chandra and Syed Irfan Ahmed in lead roles.

Kalki is an investigative Thriller based on a Village backdrop, directed by Prashanth Varma, the film stars Rajasekhar, Adah Sharma, Nandita Swetha, and Pujita Ponnada in the lead roles.

U Turn, 2018 Telugu and Tamil bilingual thriller film written and directed by Pawan Kumar. It is a remake of Kannada film of the same name. Samantha, Aadhi Pinisetty, Rahul Ravindran, Bhumika Chawla and Narain played the main roles. Though it is a Telugu Remake, the film has not missed its true Essence of narrating the story to the audience with gripping suspense as it is in the Original Kannada version.

This is one of the most gripping story and completely new to Telugu audience based on parallel lives. The Love birds Jeeva and Joshna are happy in their relationship but things goes bitter when they learn that they are leading parallel lives to a couple who faces troubles in their lives. Okka Kshanma is a concept based suspense thriller film directed by Vi Anand and produced by Chakri Chigurupati starring Allu Sirish, Surbhi Puranik, Srinivas Avasarala and Seerat Kapoor in the lead roles.

As said earlier, Suspense Thrillers are not new to Telugu audiences but “Kshanam” is treated differently from traditional way of storytelling. Though it is a psychological thriller, the misleading scenes were told in a gripping way to the end. Kshanam is Telugu Suspense Thriller film, that was released in 2016, directed by Ravikanth Perepu, the film stars Adivi Sesh, Adah Sharma and Anasuya in lead roles.