Here are the latest news of BA Raju Biography, Age, Wiki, Wife, Family, Movies Death & More. BA Raju was a Senior PRO, Professional Journalist and Producer. In the beginning stages he worked as a PRO for Mega star Chiranjeevi and he has close association with Super Star Krishna family. Also, He worked in many Telugu, Tamil, Bengali, Malayalam movies. BA Raju is 62 Year Old, On 21st May 2021 He was Die due to of a Heart Attack. Tollywood Shocked and saddened by the sudden demise of B.A.Raju. 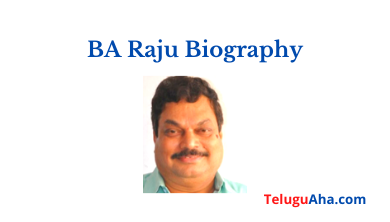 BA Raju is an encyclopedia of movie knowledge. He worked as PRO for Super Star Krishna movies and Chiranjeevi movies. Also he was the coordinator of Super Star Krishna and Maesh Babu fans association. He Worked for Many movies directed by her wife B Jaya  including Vaisakham, Lovely, Premikulu, Chantigadu and others. His wife B Jaya is a well known Tollywood film director also died due to bad health conditions recently.

BA Raju is one of the senior media personalities. He is associated with numerous Telugu films and is regarded as one of the pillars of Telugu media and acted as a bridge between Tamil and Telugu movies which helped many Tamil actors and celebrities to earn a fame in Tollywood.

B.A.Raju, who started his film career as a PRO who looks after publicity affairs at superstar Krishna later became a full time film journalist. After working as a film journalist for various channels & daily magazines like Andhra Jyoti, Jyothi Chitra, Udayam and Shivaranjani, BA Raju started a super hit magazine in 1994 with his wife Jaya.B (Kalidindi Jaya) and created many sensations in film journalism.

He is not just a film journalist but also worked for many top filmmakers, directors, heroes, heroines and technicians. B.A.Raju has also worked as a publicity in-charge for over a thousand films. Raju played a key role in the success of many Tollywood big films.

As a Tollywood Producer

His wife Jaya.B is one of the first Lady directors in Tollywood died in 2018. He has two sons, Arun Kumar and Shiva Kumar. Both are working in the film industry. Arun Kumar is a VFX expert for Hollywood films wile Shiva Kumar is in the process of making Tollywood debut as a director.

Despite having very close association with all the tollywood stars, BA Raju has a good rapport and bonding with superstar Mahesh Babu from his childhood days. Also he monitors Super Star Krishna and Mahesh Babu fans associations in Telugu states.

Leading film journalist, producer, Owner of Tollywood film magazine, industryhit.com BA Raju died of a heart attack (due to sudden fluctuations of diabetes & lead to cardiac arrest) at Hyderabad Care Hospital today 21-05-202021 at 07:56 pm. He is 61 years old. He has two sons, Arun Kumar and Shiva Kumar. His wife Kalidindi Jaya, a well-known writer, journalist, columnist and director, died two years ago. Meanwhile, the Telugu film industry has expressed shock over the death of BA Raju.