Attarintiki Daredi Serial: Attarintiki Daredi is the most Popular Serial on Etv Channel, Sarath has directed it. It started airing from November 10, 2014. This Serial Premiers from Monday to Saturday at 2.30 Pm. Let’s Know more about this Serial details. 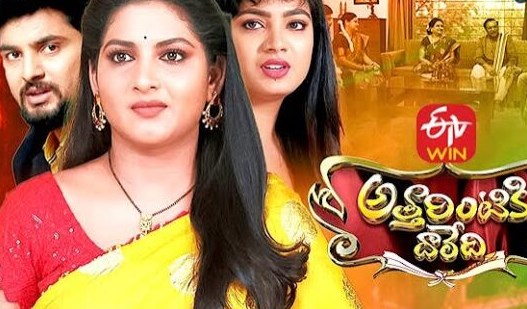 Attarintiki Daresh is Completely an Emotional family Drama. Krishnaveni lost’s her father in very young age. She grows under her Uncle Krishnababu. He already has a Daughter. Both grew up like Sisters. But Krishnababu faces financial Problems and He was offered by Vamshi’s Mother a Huge amount of Cash If he agrees to her Condition.

Vamshi is a mentally retarded person. Vamshi’s mother says that If Krishnaveni married to his son then he will paid. Krishnaveni agrees to that but faces many problems. What problems she faces, will she overcome all this is going to be interesting part of the Serial.

Anil Allam is a well known and Popular TV actor. He was born in West Godavari. In the beginning of this career he worked as camera man. On suggestion and reference of one of this friend, He started acting in Serial. He also appeared in some of movies.

Pallavi Ramisetty is one of the Top Telivision Actress. She began her career with Serial Rangula Kala. Later She also appeared in serials like Bharyamani and Aadade Aadharam, with which she gained much popularity. Pallavi Ramisetty also won Nandi Award for her performance in Bharyamani Serial.

Attarintiki Daredi Serial Premiers from Monday to Saturday at 2.30 Pm on Etv Channel. Watch Serial only on ETV Channel, Dont go for Youtube though some youtube channels explain you episode wise in detail. All those are not true, So watch only on Etv Telugu Channel.