Anubhavinchu Raja Movie OTT Release Date: Raj Tarun who proved himself to be a versatile actor with his acting skills and movie selection is coming up with a new subject title Anubhavinchu Raja. The film shootings have been wrapped up. It is going to be released quite shortly. It’s written and directed by Sreenu Gavi Reddy. The music for this film is composed by Gopi Sundar. 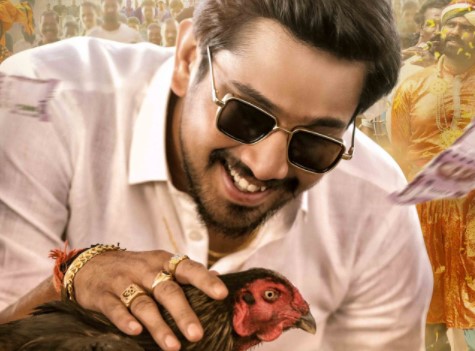 Raj Tarun in the poster is seen holding a rooster in his hand. He plays the role of a rich man from Bhimavaram in AP. Nagarjuna on his Twitter wrote “glad to release the first look of Raj Taruans’ upcoming movie Anubhavinchu Raja.

Nagarjuna Akkineni who introduced Raj Tarun in Uyyala Jampala is producing this film along with Supriya Yarlagadda. While Raj Tarun has one more film Stand Up Rahul set to be released quite soon.

The film has finished its shooting and is set to release in theatres quite shortly.

The film poster unveiled by Nagarjuna on his Twitter account suggests that the film is based in a remote village in Bheemavaram in AP.

Kashish Khan is paired with Raj Tarun in the Anubhavinchu Raja movie. The details of the film cast & crew are yet to be announced later.

Nagarjuna Akkineni who is celebrating his 62nd birthday took to his social media Twitter to unveil the first teaser of Raj Tarun’s upcoming movie Anubhavinchu Raja. In addition to it, several films are geared up for release in theatres. The film is expected to air on digital platforms after theatrical release.