Ante Sundaraniki First Review: Nani’s much-awaited film Ante Sundaraniki has been creating a buzz in Telugu Film Industry as Nani is known for his comedy after a long gap he is coming up with out and out comedy film so the expectations raised even more, so the film is all set to release grandly on June 10, 2022, well the fans have been waiting to know the review, and the first review is out from USA premiers, so without any delay lets get to jump into the review. 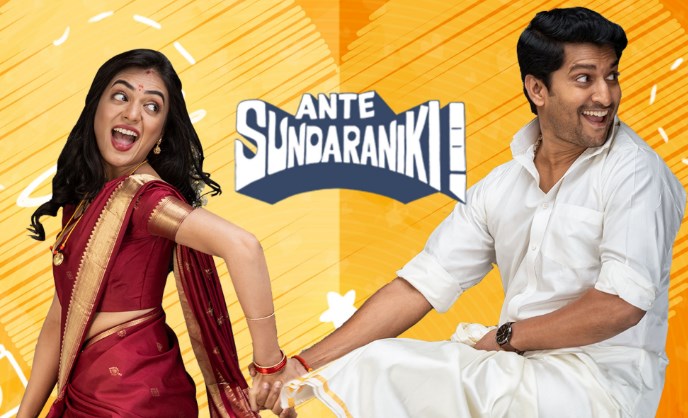 The film is about Sundar Prasad who was born and raised in a traditional brahmin family after he returns from the USA he fell in love with Leela Thomas who belongs to the Christian community, but things are not smooth as it seems and the duo decided to exchange their casts for acceptance of their respective families, but the real twist is something bigger well you need to watch the film.

The premise and world-building of the film is the major asset of the film that all the characters are beautifully written by Vivek Athreya, the film starts off well and the first half went smooth as you never feel dragged or bored, Nani and Naziriya and the rest of the cast make you laugh throughout the film.

Initially, fans and critics have a lot of doubt about its runtime as its about 2hours 56 minutes, generally, we have seen nearly 3 hours of runtime in Arjun Reddy, RRR but 3hours of runtime for a comedy film needs a lot of guts and they proved that if the content is good then there is no point of thinking about runtime, while watching the film there is no one scene that you feel bored.

Talking about the performances, Nani as Sundar Prasad killed it, as he never disappoints with comedy roles and Nazriya as Leela Thomas is so cute and she is the only one who can portray the Leela Thomas character and rest of the cast are did well and Vivek Athreya is one of the most brilliant writers as he designed all the characters so relatable and you will instantly with all the characters.