Ante Sundaraaniki Movie OTT Release Date: Ante Sudaraaniki is the romantic entertainer movie starring Natural Star Nani in the main lead role. At present Movie is in pre-production and makers are planning to release it by the end of this year. Vivek Athreya is the writer and Director of this Movie. 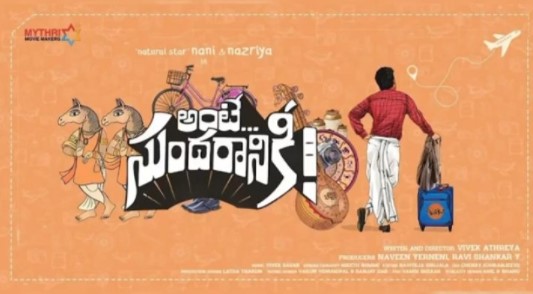 Story revolves around a youngster(Nani) who’s life changes after meeting a lovely girl (Nazriya). Two Character are of two different Cultures. How they meet together, How his life changes is the crux of the story. By the poster it seems to be Classical Village comedy mix backdrop story.

Naveen Yerneni and Y Ravi Shanker Producing this movie under banner of Mythri Movie makers. Vivek Sagar Composing this film while Cinematography is being done by Niketh Bommi.

Ante Sundaraaniki going to be 28th Film for Natural Star Nani in his Career. Nazriya Fahad is playing the female lead in this movie. Some VFX visuals can also be expected as VFX work done by Y Hari Krishna.

Makers are Planning to release this movie in theatres by the end of this year. Shooting was postponed becuase of pandemic restrictions and Nani was also busy in Shyam Singharoys’s shooting. OTT Streaming rights of this Film aren’t announced officially till now.

If Everything goes well in releasing this movie by the year end then OTT Release dates can be expected just 2months after its release. Just after final wrapping up of shyam singharoy’s shooting Nani started this Movie shedule. On the whole this movie seems to be completely a Comedy entertainer.

When is Ante Sundaraniki OTT Release Date and Time?

Theater, Ante Sundaraniki movie will hit the screens on 10 June 2022.

Is Ante Sundaraniki hit or flop?

The movie will hit the theaters on 10 June 2022. Keep Visiting our Website for latest Updates on Movies.