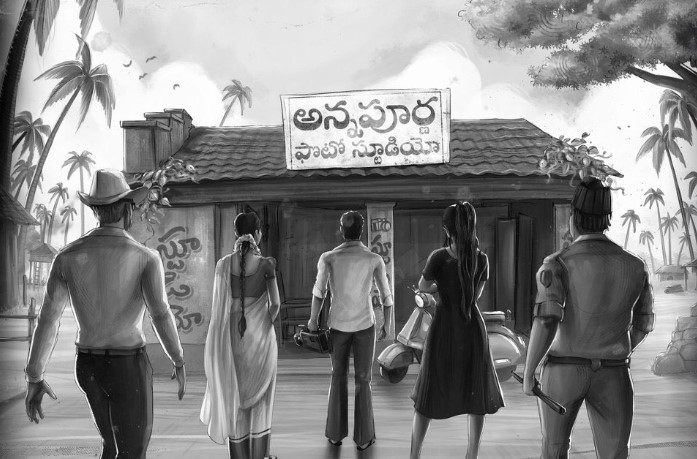 Annapurna Photo Studio’s first look has been unveiled by ace director Harish Shankar and he said the title looks catchy and hopes this crime comedy will be a huge success. He is busy with the script work of Ustaad Bhagat Singh and in January the film will go on floors.

There is no absolute information about the story but the director said that this film is set in 1980 and is touted to be a crime comedy that takes place in a village. Makers will reveal an official synopsis very soon and will update you.

Chaitanya Rao, Lavanya, Mihira, Uttara, Raghava, Aditya, and others, and the film is directed by Chendu Muddu, Music has been composed by Prince Henry, and the film is produced by Big Ben Studious, and the rest of the details will be revealed soon.

The film grabbed the attention with the title at the very first, back then every village used to have a photo studio and we were all quite fascinated by the photos and director took quite a promising and relatable point and let’s see how he will narrate the story with a crime comedy backdrop. However, the film’s concept poster was released by Harish Shankar and he was impressed with the title and extended his wishes to the team.

He began his second flick as a lead hero with Annapurna Photo Studio which looks quite interesting, and he seems quite happy with the script, and let’s hope for the best.

Annapurna Photo Studio’s regular shoot will be commenced very soon and makers are planning to finish within 2 months and aiming for a summer release. However, talking about the film’s digital rights as of now there is no information about who acquired the digital rights but we can expect to be revealed all the information after the theatrical release until then, stay connected with us.

Lavanya, is mostly known for her short films like True and her recent outing Assistant Director, which was a brilliant hit, and she did a film as heroine in a film called Undiporade which was released in 2019. After a long gap she is now doing this film and during the launch of the concept poster she said that she is so excited about this film and her look will be very special in the film, however, let’s the film will give success to her.

Chendu Muddu, made a debut with the film called ‘E Cinema Superhit Guarantee which was released in 2015 and was a disaster after he took an almost five years gap and made a comedy flick called O Pitta Katha starring Viswanth. However, now he is coming up with an interesting flick called Annapurna Photo Studio’ he said the film is a crime comedy set in a village and runs in 1980 which sounds interesting right? In, addition, he said the film mostly focused on comedy and he is hoping that the film will connect with all sections of the audience.

Talking about the OTT release date, as of now makers haven’t divulged anything and makers are planning to release it on OTT instead of theaters, and everything will be divulged in the coming days until then stay tuned with us and once we get the official confirmation we will update you.

Annapurna Photo Studio makers haven’t released the trailer yet as the film is currently under production so it will take time to release the trailer. Once the makers released it officially, we will upload it here.

When is Annapurna Photo Studio OTT Release Date and Time?

Not Declared, Annapurna Photo Studio movie makers have not yet announced.

Not Declared, Annapurna Photo Studio movie makers have not divulged yet.

Not Declared, Annapurna Photo Studio movie has not been released so we can not say Hit or Flop

Annapurna Photo Studio is billed as a crime comedy set in 1980 in a village, the film brings back the nostalgic feeling of the old days when we used to have an emotional connection with photo studios.