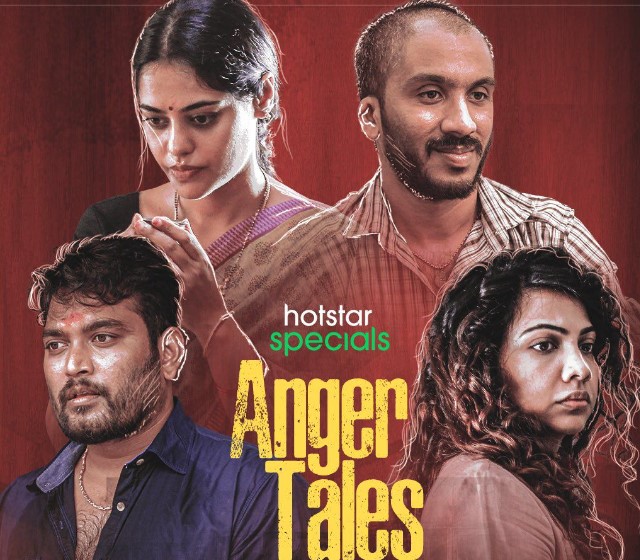 The series has an ensemble cast like Venkatesh Maha and Tarun Bascker both are known as directors, although now been a part of this anthology. This series tells 4 different stories and the makers haven’t announced the release date yet, and we can expect it very soon, stay tuned with us to know more interesting information about the series.

The story revolves around four people namely Ranga (Venkatesh Maha), Pooja (Madonna Sebastian), Radha (Bindhu Madhavi), and Giri (Phani Acharya). Along with famous director Tarun Bhaskar, people like Suhas and Ravindra Vijay also appeared in important roles in this series. Makers haven’t revealed the story as of now they have dropped only the no dialogue teaser and will get to know what the story is after the trailer is released.

Anger Tales is in the post-production stage right now and once the series completed its post-production works and then we can expect the release date. Lately, anthologies have been coming out well in Telugu as well like Netflix’s Pitta Kathalu, a recent Netflix anthology called ‘Meet Cute’ which was produced by Natural Star Nani, and also an anthology called ‘Panchatantram’ has been released in the theaters. Generally, we have seen anthologies based on love, relationship, etc but this Anger Tales seems quite different as this series has 4 different stories and has only one agenda is rebellion which is quite interesting.

Anger Tales web series has an ensemble cast, Venkatesh Maha who impressed with his directorial C/O Kancherapalem, he did a film called ‘Uma Maheswara Ugra Roopasya’ starring Satya Dev which is an official remake of Mahishinte Prathikaram. Venkatesh Maha was more into acting and production rather than directing a film, he did films like Raj Tarun’s Standup Rahul’ and Nani’s Ante Sundaraniki. Another brilliant actor Suhas started off his career with short films and he was last seen in Adivi Sesh’s Hit 2, he was praised for his performance, and now he is playing an important role in this series.

Malayalam actress Madonna Sebastian rose to fame with the Malayalam film Premam and also did a role in Telugu Premam as well and she was last seen in Nani’s Shyam Singh Roy. However, she did films across the languages like Kombu Vatcha Singamda. Apart from Anger Tales, she is been a part of films like Identity and Padmini both Malayalam films. Talking about Anger Tales digital rights, Anger Tales digital rights were acquired by leading OTT platform Disney+Hotstar, however, they haven’t anounced the series’ release date yet.

Tharun Bhascker is known for films like ‘Pelli Choopulu and ‘Ee Nagaraniki Emaindi’ after that he went into hosting television shows and acting in films as he was last seen in Dulquer Salman’s epic love story Sita Ramam and now he is roping important role in this Anger Tales web series. He is not only an actor and director, but he also penned the dialogues for Vishwak Sens’s recent film Ori Devuda.

Bindu Madhavi recently won the Bigg Boss Telugu title and she is been busy with a few films across the languages she is been a part of a Telugu film called ‘Naga‘ and part from this Anger Tales, she has films in her pipeline with films like ‘Yaarukum Anjael’, ‘Mayan’, Pagaivanuku Arulvai’. talking about the Anger Tales OTT release date as of now makers haven’t anounced the OTT release date very soon they will anounce the release date and it will be streamed on Disney+Hotstar.

Anger Tales makers haven’t dropped the trailer yet and it will be dropped before the release of the series, meanwhile, they have dropped the teaser of the series where you can see all the key characters’ introductions, you can watch it here.

When is Anger Tales OTT Release Date and Time?

Not Declared, Anger Tales movie team hasn’t confirmed the OTT release date of the movie yet.

OTT, Anger Tales will hit the OTT space very soon. The official release date is yet to be announced.

Is Anger Tales hit or flop?

Not Declared, Anger Tales movie has not been released so we can not say Hit or Flop

Anger Tales is an anthology that has an ensemble cast like Venkatesh Maha, Tharun Bascker, Bindu Madhavi, Suhas, and many more, however, this series will be premiered on Disney+Hotstar soon.