Ammu Telugu Movie Review: Aishwarya Lekshmi, who is not familiar to Telugu audience, but was seen in few dubbed movies like ‘Jagame Thandiram’, ‘Gargi’ also appeared in a leading role alongside Satyadev in ‘Godse’ that was released recently in theatres. Her new film ‘Ammu’ alongside Naveen Chandra is available for streaming from today on Amazon Prime. Let us get into the detailed review of this movie to know whether this drama is worth streaming on Amazon Prime video. 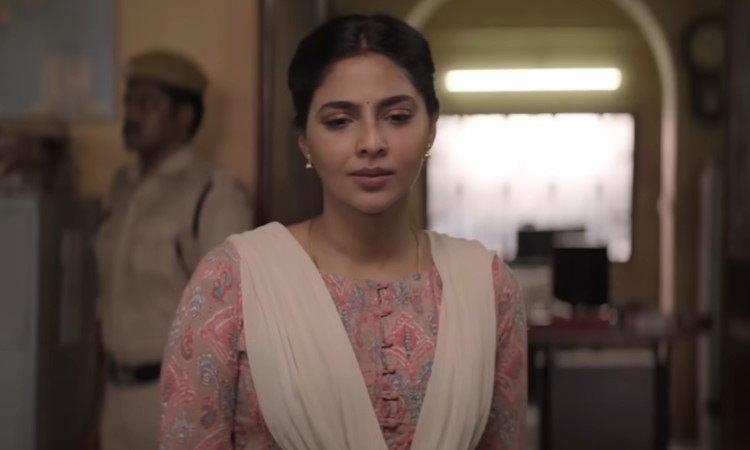 Amudha alias Ammu falls in love with a police officer named Ravi. She gets hitched to him and leads happy life for few days. But a few days later, she observes change in Ravi’s behavior. Ravi then starts torturing Ammu for all silly reasons. Vexed with the abuse and violence at home, ammu decides to destroy Ravi’s future by making him lose his job. The situations that arise there after forms rest of the story.

Ammu movie has an interesting point to explore on screen. Domestic abuse is something that is seen in most of the families in India, Many movies tried to establish this point in though provoking way with a message, but Ammu has something new in the story. It tries to educate women about their rights and at the same time also makes them remember how powerful are they and how capable are they. There are many scenes that are relatable to real life situations we watch in and around our families.

Ammu movie takes its time to slowly establish the characters and then focuses on their behaviors, building up the needed intensity in the scenes. Though movie might feel a little dragged in few scenes, it has some moments that are appreciable. Movie ended with a good message.

While it comes to acting, Aishwarya Lekshmi gave a note worthy performance in the role of Ammu. She was successful in showcasing the emotions in some scenes. Naveen Chandra is one underrated actor in Telugu, he can pull off any kind of role offered to him. He excelled in the role of Ravi as cruel husband and police officer. Bobby Simha is another good actor, who is very under used. Though his character has less screen time, he will definitely leave a mark as an actor. Maala Parvathi, Raghu Babu, and all other actors did their part as required for the story.

Technically Ammu looks okay. Music and background score composed by Bharat Shankar are apt for the mood of the film. Cinematography by Apoorva Shaligram is decent with some dark colors added to the frames that creates dark mood required for the genre. Editing by Radha Sridhar is crisp. Production values are good as required for the movie storyline.

Director Charukesh Sekar is successful to some extent in establishing the unheard stories of domestic abuse in Indian society, but director could have made the movie a little more intense to reach more number of audience.

Overall, Ammu is a good attempt made with some good scenes that are relatable. You can stream this movie on Prime, if you like to watch social dramas.