Ammaku Teliyani Koilamma Serial: This Serial has been started recently and within a short time it became popular and has been topped as one of the best Telugu serials. Kavya Shree, Nikhil Maliyakkal, Rachana Gowda played the main lead roles in this Serial. JN Raju directed it while it was being produced by Srikanth Poluri and Praja Prabhakar under PP Film Factory Productions. 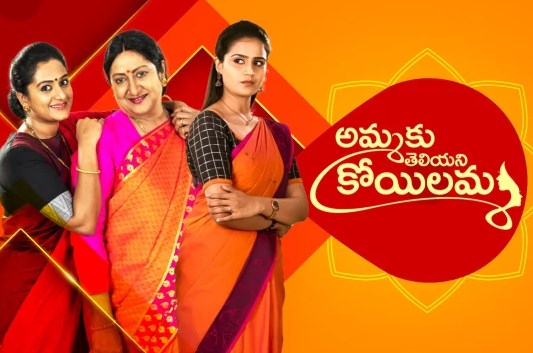 Ammaku Teliyani Koilamma Serial Started on July 19, 2021 on Star Maa. It streams on this channel from Monday to Saturday at 3.30pm. Lets know more about Cast and crew of this serial in below Table.

Ammaku Teliyani Koilamma is a Complete Family Emotion Genre Serial. JN Raju has directed it while Srikanth Poluru, Praja Prabhakar Producing it under the banners of PP Film Factory. MVVK Murthy acted as Executive Producer. The story of this serial was written by Pradeep Paanikar. The screenplay was handled by Govardhan Reddy, Dialogues are penned by Akshaya Sirimalla, and Editing by Shekar Pasupuleti. Dr. Joshyabhatia Composed Music and Cinematography was done by S. Saravanan.

This Serial will stream on Star Maa TV Channel from Monday to Friday at 3.30pm. Runtime of this serial is 20 to 22 minutes. This serial started from July 19, 2021 and running successfully till now.

Who is the writer and director of this Serial?