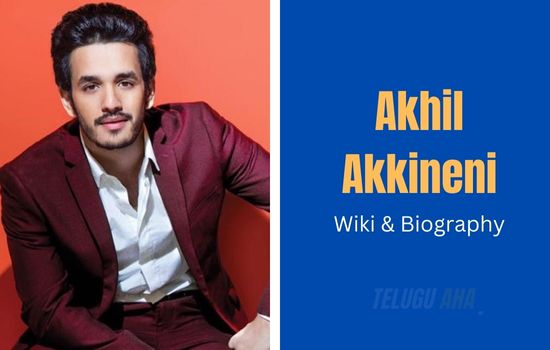 Akhil Akkineni was born on April 8, 1994. He is the son of actors Nagarjuna and Amala. From his mother’s side, he has Irish and Bengali ancestry, and from his father’s side, he has Telugu ancestry. He is Naga Chaitanya’s half brother and Akkineni Nageswara Rao’s grandson.

After he graduated from Chaitanya Vidyalaya, Akkineni went to Australia to live and study there for two years. He went back to Oakridge International School in Hyderabad to finish school. At age 16, he decided to become an actor and went to New York to study at the Lee Strasberg Theatre and Film Institute. He also got a BBA from the University of South Florida.

He is the grandson of the actor Nageswara Rao. Akhil has been interested in performing since he was a young child, so he decided to make it his job. When he was 16 years old, he took an acting class at the Lee Strasberg Theatre and Film Institute in New York City. Akhil knew exactly what he wanted to do and went after it right away, even though his father wanted him to get a business education.

Akhil’s first movie was the fantasy drama Akhil, which was made in Telugu and was directed by V. V. Vinayak. In the movie, the actor plays Akhil, a young orphan who is easy to remember. Sayesha Saigal plays the main female role. Akhil went to a stunt school for the movie and took classes there for two months with the help of his personal trainer, Kicha. Akhil won the Filmfare Award for Best Debut Actor for his role in the movie, even though the reviews were bad and the movie didn’t do well at the box office. After that, he had a small part in Aatadukundam Raa, a 2016 romantic action film by G. Nageswara Reddy.

The actor was in Hello, a romantic action thriller with Kalyani Priyadarshan. It was his second movie with a major role. The movie was liked by both audiences and critics, and it went on to do well at the box office. After taking a year off, Nidhhi Agerwal and Akhil worked together again in the romantic comedy Mr. Majnu, which was directed by Venky Atluri. Agent and Most Eligible Bachelor are two of his other well-known works.