Ajay Wiki and Biography: Indian actor Ajay works under a few different names. He is 44 years old and was born in Vijayawada, Andhra Pradesh, India, on September 26, 1978. Ajay has worked in the entertainment industries of Tollywood, Kollywood, and Sandalwood. His work has been seen in films in Telugu, Hindi, Tamil, Kannada, and Malayalam. 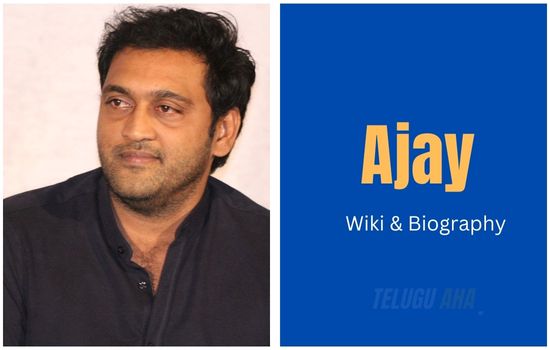 Ajay was born in Vijayawada, Andhra Pradesh, on September 26, 1978, which makes him 43 years old as of 2021. By the signs of the zodiac, he is a Libra. Because his father moved around a lot for work, he went to school in different places like Vijayawada, Nellore, and Tirupati when he was young. He went to college in the Jubilee Hills neighbourhood of Hyderabad. He signed up to take acting classes at the Madhu Film Institute in Hyderabad. He didn’t finish studying engineering before he quit. He also stopped going to the well-known Institute of Cost Accountants in India to study.

“Kouravudu,” which came out in 2000, was his first movie for the big screen. After this, he worked on several more movies, such as “Timepass,” “Kushi,” “Student No. 1,” and “Nee Sneham.” He also played the bad guy in the movie Vikramarkudu, which also starred Ravi Teja and Anushka Shetty. He also played a role in the movie “Sarai Veeraju.” Even though the movie didn’t do well at the box office, critics praised Ajay’s performance. Most of his movies have made money at the box office.

Ajay says that his role as the leader of the Maoist guerilla force in the movie “Virodhi” is his best to date. The movie itself won two Nandi Awards. One was for Best Bronze Feature Film, and the other was for Best Dialogue Writer. It was shown at the India International Film Festival in 2011.

Since his first movie role in 2000, he has built up an impressive list of roles. He has mostly been in Telugu movies, but he has also had small roles in Tamil and Kannada movies. He has been in a number of Tamil movies, such as Kireedam, Malaikottai, Machakaaran, Velayudham, Koottam, 10 Endrathukulla, Uyire Uyire, and 24, to name a few. He has been in a number of Kannada movies, such as “Citizen,” “Vayuputra,” “Saarathi,” and “Myna.” Ajay has been in movies like Bloody Mary and Sarileru Nikevvaru in the past.