Agnipariksha Serial: Agnipariksha is one of the Top Telugu Serials. It has garnered a huge number of fans and following within a short time. Agnipariksha serial streams on Zee Telugu Channel from Monday to Friday at 9.30 pm on . This serial was launched on October 18, 2021. Lets know more about this serial. 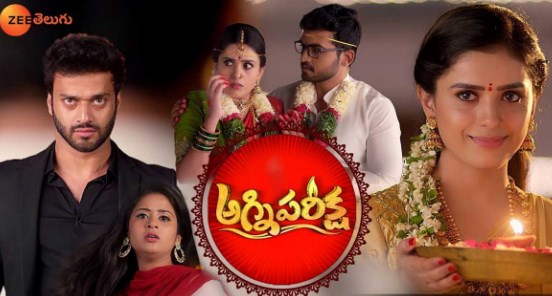 Agnipariksha is a Complete Romantic Family drama Serial. Thanuja Gouthami Naveen and Aakarsh played the main lead roles. Amar and Radhika love each other and want to get married. But Radhika marries another man of her father’s choice. Amar gets very disturbed and wants to avenge on Radhika. Amar marries Radhika’s younger sister Priyanka. Priyanka tries to cool Amar. The whole story revolves around this plot.

Agnipariksha Serial is not the remake of any other language serial but the main plot and concept were taken from Hindi language’s Agneephera Serial.

Agniparkisha Serial was directed by Puli Vasu while Meena Vasu has Produced it. Thanuja appears a Radhika, Gouthami as Priyanka, Naveen as Kailash, Aakarsh as Amar, Prabhakar as Krishna Murthy, Shanthi as Sujatha and Sririsha as Sakuntala Devi.

Agnipariksha Serial streams from Monday to Friday at 9.30pm on Zee Teluguf Channel. This Serial was first launched on October 18, 2021. Within short time it has garnered huge fan following.

When did this Serial Launch?

October 18, 2021 is the starting day of this serial streaming on Zee Telugu Channel

Who Directed t his Serial?

Puli Vasu has directed this serial while Meena Vasu has Produced it.

What are the streaming times of this serial?

Monday to Friday 9.30pm this serial will stream on Zee Telugu Channel