Adavallu Meeku Johaarlu Movie Review: Adavallu Meeku Johaarlu from the past few days this film was created a lot of buzz in the Telugu Film Industry as the movie is filled with a prominent cast and very relatable concept. after the trailer was dropped 5 days ago it, even more, created curiosity to watch because the trailer filled with a lot of comedy. after several postpones, finally the movie has arrived today in the theater on March 4th, 2022. 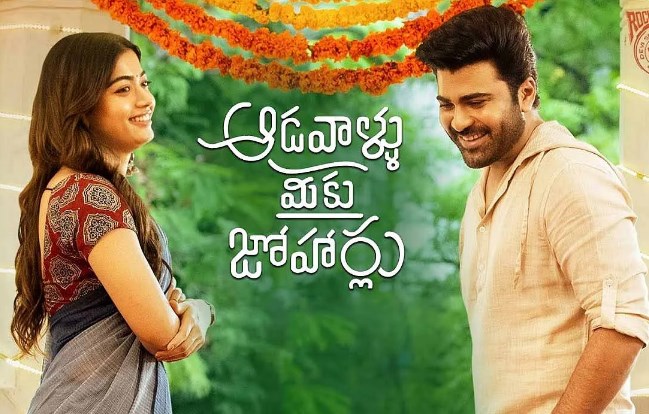 The movie has been getting a positive response from the morning show itself, saying that the movie is a laughter ride and audience reactions was crazy at the theater, it seems after several flops Sharwanand got hit, hope this talk will continue. and one of the biggest backbones of the film is the star cast and that too the film filled lot of lady cast, and that has helped to grab the attention of the family audience, and worked out also. let us see how this film turned out to be good and is it worth watching or not.

Chiru(Sharwanand) is easy going guy and he lives is around full of ladies in his house. like his family, he also wants an arranged marriage and his entire lady gang starts looking for a perfect match for him, but things not smooth as it seems his lady gang needs a perfect bride for chiru but they are never satisfied with any girl and it continues, in the proceedings, Chiru realized that his lady gangs never get a girl so he decided to find himself and in the process, he meets Aadya(Rashmika) and fell in love at first sight but Aadya has its own world but slowly she also fell in love with Chiru and Chiru’s family also accepts here the twist arrises in the tale that Aadya’s mother Santahamma(Khushboo) wants after marriage her daughter has to work in the office and her son in law Chiru has to take care of family and children’s in the house. Finally, will Chiru and his Family accepts Santhamma’s decision? how Chiru deal with it forms the rest of the story.

Adavallu Meeku Johaarlu has a brilliant cast and everyone is brilliant at their respective characters and staring Shrawanad and Rashmika Mandana are the main leads and also features Bramhanandam, Radhika Sarath Kumar, Khushboo, Vennela Kishore, Rajitha, RCM Raju, Urvashi, Ravi Shankar, Jhansi, and the movie is directed by Kishore Thirumala, Cinematography handled by Sujith Sarang, while music composed by DSP and the movie produced by Sudhakar Cherukuri under the banner of Sri Venkateshwara Cinemas.

Adavallu Meeku Johaarlu movie never gets bored from the start to end because the movie is a laughter ride for the audience thought the storyline looks simple but the director Kishore Tirumala dealt with comedy and that’s why he didn’t give a chance to think about the story.

Though the movie starts of slowly and the director takes time to establish all the characters in the first 15 min of the film after the introduction of the character the movie will take you to Chiru (Sharwanad’s) world.

Sahrwanad as Chiru is just brilliant, we all know how brilliant an actor he is and he needs the right film to showcase his strength and i think this film is the right film, we often see Sharwa in a series of roles with some comic touch but this film is out an out comedy film and Sharwa effortlessly pulls it off.

The rest of the casts are done their part well and Sujith Sarang’s visuals are okay as he just stuck to the director’s vision and the music of DSP is not up to the mark.

You can give it a try without any expectations and you will love it.