Acharya Movie Review: A much-awaited film in the Telugu Film Industry is Acharya, Chiranjeevi, and Ramcharan has shared full-length screen space for the first time, carrying humongous expectations the film has released today April 29, 2022, in the theaters and there are no doubt fans have been going mad by seeing both of them on screen. However, the film has been getting positive responses from all over the world, and critics also gave positive reviews. Despite all these, let’s see whether this film lives up to the expectations or not and is worth watching or not. 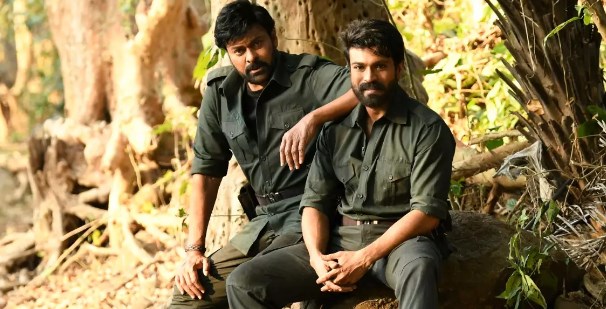 Acharya’s story is set in a temple town called Dharmastali, where once Dharmastali follower Basava (Sonu Sood) starts illegal activities in Dharmastali. In the proceedings Dharmastali villagers start facing problems from Basava, There Acharya enters into the field to save them, and revolts against Basava’s illegal activities. Finally, Why did he comes to Dharmastali? What was the connection between Acharya and Siddha? to all these answers you need to watch the film

Acharya stars Chiranjeevi, Ram Charan, Pooja Hegde, Sonu Sood, Tanikella Bharani, and others, the film was directed by Koratala Siva, While the Cinematography has done by S.Thirunavukkarasu, Music has done by Mani Sharma and the film Produced by Niranjan Reddy, Anvesh Reddy under the banner of Konidela Productions.

Chiranjeevi and Ramcharan has Sharing the screen space for the first time as full-fledged characters, these two persons are the USP(Unique Selling Point) of the film. Fans and movie lovers will go to theaters to see them on the screens and they don’t care about the story at all.

Despite the star cast, dances, and elevations, the director Koratala Siva failed to engage audiences, Acharya movie starts off interestingly with the voice-over of Mahesh Babu, later on, the story went into a regular commercial format like villagers’ problems with villains then hero intro, fight, and then song, after the interval story gets interesting when Chiranjeevi and Ramcharan’s Naxalite backdrop sequence and Revealing the twist of Siddha and Acharya’s connections worked out well. but somehow audience can clearly understand while watching that this is not a Koratala Siva marl film. over stretched scenes in the second half test the audience’s patience.

Ramcharan as Siddha is good as he justified his character, recently Ramcharan has delivered an unbelievable performance in RRR, if we go with that expectations then he might disappoint us. and   Chiranjeevi as Acharya is just brilliant, he proved that his swag and style never get old, and he looks so good on screen. Pooja Hegde as Neelambari has no scope to perform her character designed only for Siddha’s love interest. and the rest of the cast did well.

Koratala Siva is one of the coolest Mass directors in the Telugu film industry. he doesn’t talk much but in his films talk, he always tries to communicate with the audience with his films and we can clearly see in every film he wants to give a message to society, to make such films in a commercial format is not easy but he became a master in that, However, Acharya is not a message-oriented film at all, and it is not a Koratala Siva kind of film, he presented himself in a new version, he managed both the stars quite well, but the story could have been better.

Technically Acharya looks top-notch, I would say behind the screen hero was the art director Suresh Selvarajan, he created a world called Dharmastali with huge temple sets, the cinematography was impressive the use of color tone and lighting was brilliant, Manisharma’s music is not up to the mark except Bale Bale Banjara but he showed his mark in the background score, Ram Laxman’s fights and his Background score worked out well on the screen.

Finally, Acharya is worth watching for Chiranjeevi and Ramcharan’s screen presence.