Abhiram’s Ahimsa Movie OTT Release Date: Rana Daggubati’s younger brother Abhiram is debuting as a hero under Teja’s direction. on the occasion of director Teja, birthday makers released the pre-look the film titled ‘Ahimsa’. The pre-look seems very intense and let’s hope this film is the perfect comeback for Teja. 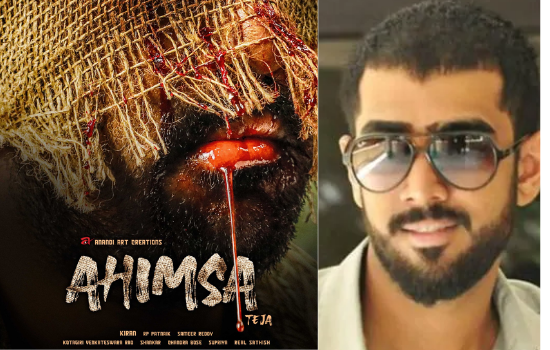 It is only pre look of the film and the makers have not divulged any details about the story, but if you observe the pre look as Abhiram looks very intense as blood drips from his face, we see the violence in pre look but the title is complete opposite Ahimsa which means non-violence, Teja might raise his voice to society with this film.

Ahimsa movie starring Abhiram as the main lead and  Gitika Tiwari playing as female lead more cast yet to be announced, while Teja is directing the film, cinematography handled by Sameer Reddy, music composed by RP. Patnaik and the film are produced by P.Kiran and bankrolled by Anandi Arts Creations.

Ahimsa is Abhiram Daggubati’s debut film and directed by Teja and the film is going to release in 2022. all the details will update soon stay tuned with us.

Ahimsa principal photography has wrapped up, and post-production work is going on as per the sources the movie will release in summer 2022. we will update you once we get the official news.

Makers decide to release it in the theater because Abhiram is the younger brother of Rana Daggubati and grandson of DR. D Ramanaidu so it has to be a grand release, and after the theatrical release makers will divulge about OTT release date, till stay tunes with us we will update you once we get the official news.

Ahimsa seems Teja’s mark film and Abhiram looks stunning in the pre look and the film is going to hit on screens in summer 2022.