Aaradugula Bullet Movie OTT Release Date: After much awaiting since 4yrs Gopichand Starrer Aaradugula Bullet is all set to hit big Screens on the occasion of Dussehra in October 2021. Making was completed in 2017 itself and getting postponed because of Many reasons. B Gopal Directed this movie while Thandra Ramesh Produced it under banner of Jaya Balaji Real Media. 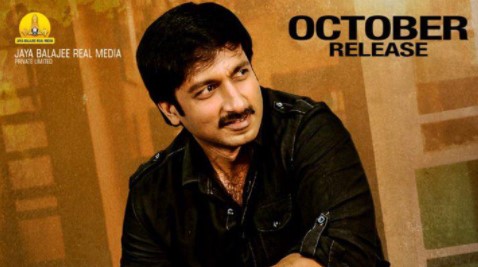 Aaradugula Bullet is an Action Packed Family Comedy Drama Movie. Gopichand Plays the role of Jayadev and Nainathara as Nandhini. Jayadev is a Careless guy with no job, fells in love with Nandini. Things go upside down when Antogonist enters in the Plot of the story. Whole movie is set and surrounds in the locations of Vijayawada. Brahmanandam Comedy seems to be one of the highlight of this movie.

Vakkantham Vamshi has written the Story and Screenplay and Abburi Ravi has penned dialogues. Longback Makers Planned to release this movie on 9th June 2017 but couldn’t because of financial troubles.

Aaradugula Bullet Movie is all set to hit Big Screen on the Occasion of Dussehra in October 2021. Ott rights and digital rights details aren’t announced by the film makers. This film is the long awaited since 2017 and last releasing after Gopichands Seetimaar becomes a blockbuster.

Aaradugula Bullet movie is going to release in theatres on the occasion of Dussehra in October 2021. If Everything Goes well in its release then Ott Release can be expected in November / December 2021.