Aakasam Telugu Movie Review: Ashok Selvan has created some image for himself in Tamil film industry, but not so familiar in Telugu film industry. His movies ‘Pizza 2: Villa’ and ‘Thegidi’ were dubbed into Telugu and received good response. ‘Ninnila Ninnila’ film released directly on OTT and received critical acclaim. His new movie is shot simultaneously in Telugu and Tamil, where Tamil version is titled as ‘Nitham Oru Vaanam’ and Telugu version titled as ‘Aakasam’. Let us get into the detailed review of this movie to know, if Ashok Selvan is able to entertain the Telugu audience and create his market in Telugu. 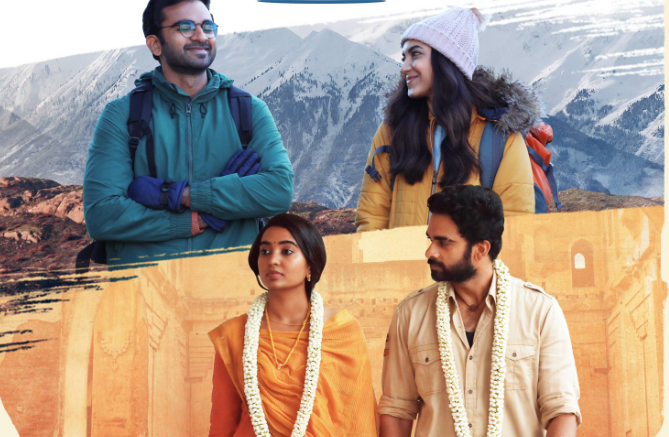 Arjun accidentally meets Subhadra during a journey and starts a conversation with her. Arjun slowly starts narrating his life journey through different stages and also speaks about Meera Meenakshi & Mathi Prabha the girls who were earlier in relationship with Arjun. Arjun travel along with Subhadra in search of his life and rest of the story is all about the changes that happen in the life of Arjun after the journey.

Aakasham stars Ashok Selvan and Rithu Varma as the main leads in the film and also features Aparna Balamurali and Shivathmika Rajasekhar, and the film was directed by Ra. Karthik while the cinematography has done by Vidhu Ayyanna, the music is composed by Gopi Sundar the film was produced by Viacom 18 studios in association with rising East.

Aakasam is one such movie that will surely remind us of few Telugu movies like ‘Na Autograph sweet memories’, ‘Premam’ and ‘Thank You’, as all these movies are made on similar concept of life. A person struggling with his life, finding his love, overcoming his struggles and realizing the real meaning of life, this is how Aakasam movie starts and ends. Aakasam has some good scenes that will surely entertain the audience and make them connect with the characters on screen. Especially the scenes that are designed between Aparna Balamurali and Ashok Selvan. But Aakasam looks routine with other scenes of Ashok Selvan involving with Ritu Varma and Shivatmika Rajasekhar.

While it comes to acting, Ashok Selvan will surely impress Telugu audience with his role that has multiple shades through out the running minutes. He was able to show the difference not just by the looks, but also with his performance in different scenes. Aparna Balamurali role & performance is another major highlight in the movie. Scenes that involve Aparna will surely entertain audience and her performance will stay with us. Ritu Varma looks routine in her role, as we have seen her in such roles earlier. Shivatmika Rajasekhar looks okay in few scenes, but has to improve here acting skills to make her mark as an actress in Telugu.

Technically Aakasam looks good. Songs and background music composed by Gopi Sundar are very apt for the scenes and sounds soulful. Cinematography Vidhu Ayyanna is another major highlight in this movie. He was able to capture some beautiful locations and set the frames that will grab the attention of our eyes. Editing could have been better, as some of the lengthy scenes can be easily chopped off. Production values of the movie are good and are as required for the story.

Director Ra. Karthik tried to explore the journey of life on screen with some emotions added to it, but was only partially successful as most of the scenes resemble the scenes from the movies made with the similar concept in the past.

Overall, Aakasam movie is worth watching movie with some life lessons. Though the movie has few flaws and resemblances from old movies, it can connect to your heart with the characters and performances.