Aa Ammayi Gurinchi Meeku Cheppali Movie Review: Though Sudheer Babu and Mohanakrishna Indraganti’s ‘V’ movie didn’t fare well still they have a good understanding. However, After Sammohanam and V the duo is back with another interesting tale called ‘Aa Ammayi Gurinchi Meeku Cheppali’ right from the teaser to the trailer it looks like they are going to create a rage at the theaters like Sammohanam, well carrying the humongous expectations the film got to released today September 16, 2022, and without any delay, let’s delve into the in-depth review and find out whether the film is worth watching or not. 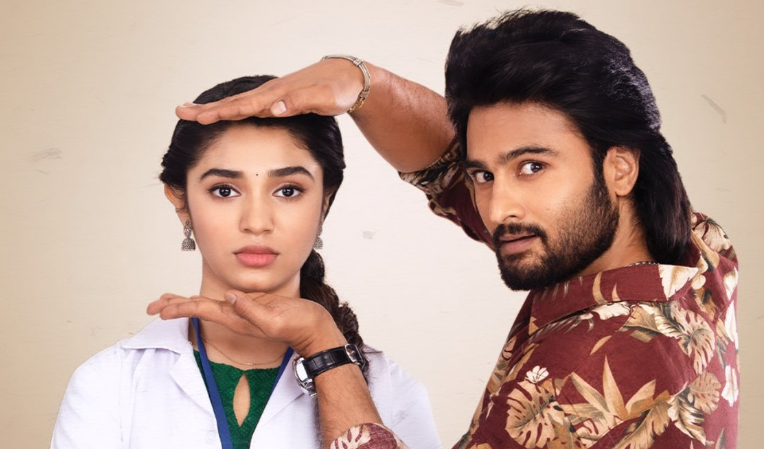 A successful hardcore commercial filmmaker decides to make a female-centric film, for that he is in a search of a suitable girl for the character, eventually, he finds a girl called Alekya(Krithi Shetty) she is a doctor by profession and initially she refused to act but finally she accepts and in the process of making the film he fell in love with Alekhya. here the twist arises in the tale when Alekya’s father got to know about his daughter doing a film, Finally, will she finish the film, how does he cope with all these situations forms the rest of the tale.

There are few filmmakers we have in Telugu Film Industry who always come up with unique stories and realistic character designs and Mohanakrishna Indraganti is one among them, he is the one who genuinely sticks to the subject and that made him a unique filmmaker, and created a separate fan base, well Aa Ammayi Gurinchi Meeku Cheepali premise resembles Sammohanam movie because of the film backdrop, apart from that the two films are the complete opposite.

Well the director took time to establish all the key characters and that was the reason the story takes time to take off, however, you will start traveling with each character once all the characters and their conflicts are established. The first half went with clean comedy and engageable drama and the interval block excites you to watch the second half.

However, the second half focused more on emotions rather than comedy, and after a point that might become overweight for a viewer to watch and the film gets interested at the pre-climax where we can Mohankrishna Indraganti’s brilliant writing.

Sudheer Babu is one of the finest actors in TFI and he shows his mettle in his acting, especially, he performed so well in emotional scenes and I would say this is a tailor-made character to him, Krithi Shetty as Alekya is just okay though she has a good screen time, unfortunately, she failed to emote a lot of emotions and choosing different roles is quite appreciatable but on the mainstream to survive as heroin for a long period it needs performance, Vennela Kishore as typical co-director makes you laugh and Rahul Rama Krishna, Srikanth Iyengar and others did well as per the character requires.

More than a director Mohankrishna Indraganti is a brilliant writer, we can see strong characters in every one of his films and Aa Ammayi Gurinchi Meeku Cheppali also has strong characters but somehow those characters seem like extended versions of Sammohanam’s characters, and this film clearly made for an urban audience, However, he succeeded in engaging the audience with his brilliant writing.

Technically, Aa Ammayi Gurinchi Meeku Cheepali is good, P.G. Vinda always gives brilliant visuals for Indraganti films as we all know he is long time collaborator and he gave some brilliant visuals for Aa Ammayi Gurinchi Meeku Cheepali and Vivek Sagar songs are not up to the mark, he never failed to give good and catchy song but this time he seems but he impressed with his background score and rest of the technical team did well.

Finally, Aa Ammayi Gurinchi Meeku Cheppali is a decent film to watch but only for Urban Audience.