2023 Sankranthi Release Telugu Movies:  Telugu films have been making noise of success with content-based films and big-budget films as well, However, 2023 is going to be great for Telugu cinema because a lot of big films have a line of releases. Well, many big films are being released in Sankranthi and makers have booked their slots for Sankranthi 2023 releases on the occasion of Diwali. 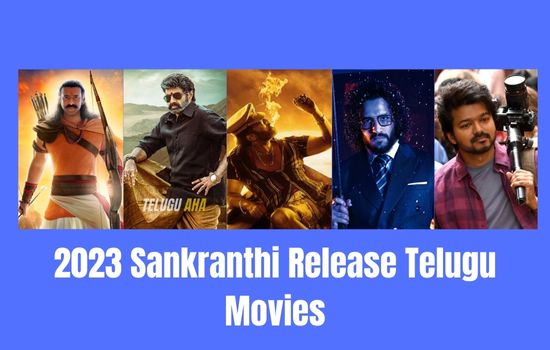 Sankranthi is the most important festival for Tollywood and Telugu Cinema lovers as well because it is a festival of big films, Every Sankranthi, the majority of the top heroes flicks have been released but last 2022 Sankranti wasn’t great but this 2023 is going to be a great start for Telugu Cinema.

Here in this article you will get the list of 2023 Sankranthi release Telugu Movies, stay tuned.

Adipurush is one of the much anticipated Indian Cinema, this film marks Prabhas’s direct Hindi film, However, along with Prabhas, Kriti Sanon plays the female lead, and Tanaji fame Om Rout, as we all know Prabhas rose to fame by playing a Bahubali in Bahubali franchise as makers capitalizing his fame and making films with whooping budgets. Adipurush mounted a budget of 500 crores and recently Adipurush created havoc across the nation with the teaser, for sure Sankranthi 2023 will be a great start with this film and it will be a visual feast for Prabhas fans seeing him as Lord Rama on screen, well, let’s wait for January 12, 2023, for a visual feast.

God of Masses is the tagline for NBK’s upcoming flick called Veera Simha Reddy, starring Balakrishna, and Shruthi Haasan as the leads, and Krack fame Gopichan Malineni directed the film. makers have dropped the first hunt teaser and it has created a rage on Youtube, NBK’s dashing look,  high octane action grabbed the fan’s and cinema lovers’ attention, However, Sankranthi is going to be a blast Veera Simha Reddy, it will be a visual feast for fans and cinephiles as well and Varalaxmi Sarathakumar has been doing an important role in the film. Mythri Movie Makers made a film with a whooping budget and they haven’t announced the precise date of the release but they confirmed that the film will be released on Sankranthi 2023.

Tentatively referred to as Mega 154 has finally announced the title called Waltair Veerayya directed by Bobby, Along with Chiranjeevi, Shruthi Hasaan is playing a female and DSP is taking care of the music. Waltair Veerayya is going to be a special film for Mega fans and moviegoers as well because Chiranjeevi is back with a mass avatar after a long gap and ever since the teaser got released the expectations got two-fold, however, fans have gone mad seeing him in mass avatar especially his looks remind Muta Mestri. Interestingly  Maas Maha Raja sharing screen space with boss, well, wait for full meals on Sankranthi.

Akhil Akkineni’s Agent is a new entry in Sankrahti 2023 race, the film marks the highest-budget film in Akhil’s career and the film was postponed several times but now Agent makers decided to fight with big films. Akhil has put a lot of effort into this film as he will be seen as SPY in the film and Malayalam superstar Mammootty is playing an important role in the film. The film is directed by Surender Reddy, well the teaser got a good response, let’s how Agent will survive in the 2023 Sankranthi race.

Unexpected combinations have been happening these days as Tamil Superstar Dhanush is doing a film called Sir with a Telugu director and now it’s Thalapathy Vijay’s turn as we all know he is been doing a bilingual film called Vaarasudu, Varissu in Tamil, directed by Maharshi fame Vamsi Paidipally, Rashmika Mandanna playing the female lead and Produced by Dil Raju in association with PVP cinema, the film has set lot expectation, well, let’s see how this film will survive in Sankranthi race.

Well, as of now these films will be released in 2023 Sankranthi, might some other films will join in this race, till then stay tuned with us.