18 Pages Telugu Movie Review: Nikhil who basked the blockbuster with Karthikeya 2 is back with a different love story called 18 Pages, 18 Pages has been making headlines for a few days just because Karthikeya 2’s success, it has a captivating plot and the team, and one of the main reasons for raising the expectations is Sukumar penned the story and carried the humongous expectations the film has released and let’s find out whether the film is worth watching or not. 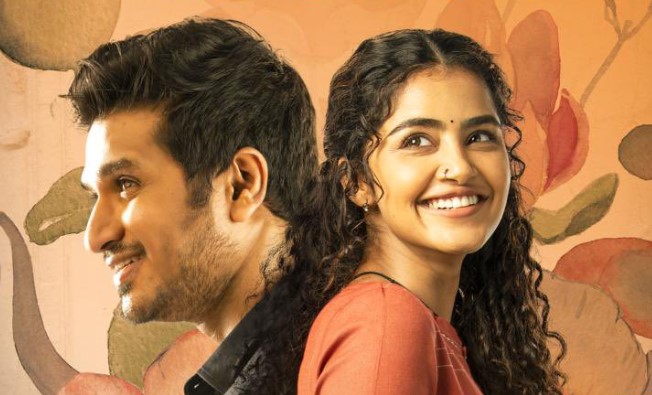 The story revolves around Nandini (Anupama Parameswaran), who lives away from the current world as she doesn’t use the phone, Facebook, or Whatsapp, and this makes Sidhharth fall in love with her, but in the course of the proceedings, he knows that she is suffering from a rare disease of memory loss. When she realizes she will lose her memory in a few days, she begins writing a diary by writing her daily routines and a twist arises in the tale when she kidnaps as well as lost her memory on the 18th page of her dairy, Finally, will Sidhharth finds her using her dairy is rest of the story.

Starring Nikhil Siddhartha & Anupama Parameswaran and others, the Story is written by Sukumar, with Screenplay & direction by Palnati Surya Pratap, and Produced by Bunny Vasu, Music by Gopi Sundar, Cinematography by A Vasanth. Editing by Navin Nooli, Production by GA2 Pictures & Sukumar Writings

It starts off interestingly by establishing the lead characters’ worlds, and here we can see the Sukumar mark of introductions. It then dives into the actual story, where two distinctive minds met at one point, and then the interesting drama keeps us invested in the story. The first half has loose ends, though it gets interesting with the narrative and interesting characters, and the love story has been written well in the first half, and the interval twists worked out well enough to make us curious to watch the latter half.

The second is in complete contrast to the first half, as the first half went with a breezy love story and with some well-written dialogue, but the second completely shifts to a thriller once Nandini gets kidnapped, from then the racy screenplay and how Siddharth finds her using her diary pulls us into the story and makes us part of it. The twists at the pre-climax and climax will blow your mind for sure. Overall, it has a loose end in the first half, but the second half holds the viewer’s attention.

While talking about the performances, Nikhil’s as Sidhaharth is partly good as his performance looks unnatural in a few scenes, although he shined in a few others, Anupama’s as Nandini does a fine job as her character demands a performance in both halves, which she effortlessly pulls off, and the rest of the cast did well.

Technically, 18 pages is good, but it could have been much better. A Vasanth’s cinematography is good in the first half, but when the story shifts to thriller in the second half, the visuals were not up to the mark. Gopi Sundar has done a good job. A few songs were good. The first half background score is good, but the latter half requires a good background score to elicit the thrill and maintain the suspense.

Sukumar Writings has a separate fan base that believes Sukumar writes unique love stories that no one has ever told before, and 18 Pages is also a unique love story, but after Kumari 21 F he came up with a blend of love story and thriller that makes the film unique, and the 18 Pages writing is fine, but Palnanti Surya Pratap partly succeeded in narrating the story in an engaging manner, where the latter half he failed to hold the suspense and

Overall, 18 Pages is a unique love story blended with suspense that can be enjoyed by every section of the audience.